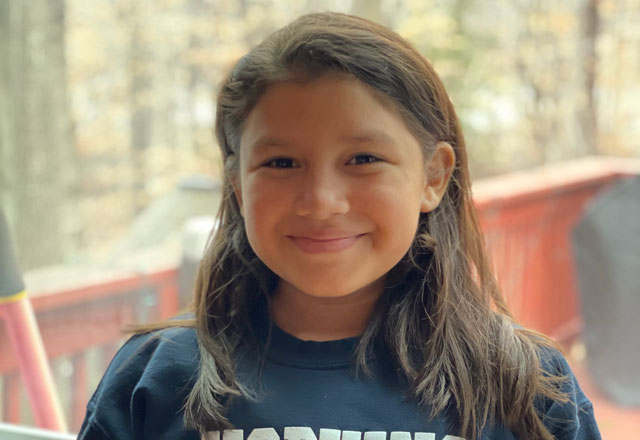 In August 2019, 8-year-old Elianna went swimming with her family and friends at a neighborhood pool, enjoying one of the last days of summer. She swam down to the bottom of the pool, and remembers hitting her head. Moments later, she was screaming in pain and her parents, Edwin and Cynthia, rushed her to a local hospital. Not seeing anything concerning on her scans, doctors sent Elianna and her family home.

A week after starting third grade in the fall, Cynthia recalls, her daughter did not seem like herself. Elianna also began vomiting and complained of “hammers in her head.” Fearing that the recent head injury was worse than suspected, Cynthia and Edwin took Elianna to an emergency room. Scans revealed that she had a 6-millimeter aneurysm on the left side of her brain and that there was a subarachnoid hemorrhage — bleeding in the spaces in her brain. Needing more specialized care, Elianna was transported to Johns Hopkins Children’s Center by helicopter.

“It wasn’t even 10 minutes in the helicopter, and we arrived at Johns Hopkins,” Cynthia recalls. “There was an entire team waiting for her. Never in my wildest dreams did I think this would be happening.”

At the Children’s Center, Elianna was taken for a diagnostic angiogram with interventional radiology. Edwin and Cynthia said goodbye to Elianna, not knowing when they would see her again. The care team determined that she needed surgery, and because a second hemorrhage can often be fatal, it was important to act quickly. Pediatric neurosurgeon Eric Jackson, M.D., and his team immediately operated on Elianna into surgery to clip the aneurysm and prevent further bleeding. They were joined by Johns Hopkins Medicine neurosurgeon Justin Caplan, M.D., an expert in brain aneurysms.

Nearly 12 hours later, Edwin and Cynthia received good news: The operation was successful, and they could see Elianna! There was a caveat, however — the extent of her potential brain injury would not be known until she woke up.

“When she opened her eyes, she didn’t recognize me,” Cynthia remembers. “As a mother, you’re willing to give your life for your children, and for your child not to remember you is very hard.”

“It’s something that I wouldn’t wish on anybody,” Edwin adds.

Thankfully, in a few hours, Elianna’s memory returned. “It was like my heart came back to me,” Cynthia says.

Elianna received extensive physical and occupational therapy to relearn things like how to walk, put on socks and hold a fork. She was walking on her own just four days after the surgery, and she returned home with her family following two weeks in the pediatric intensive care unit.

“We’ll never know if the accident caused the aneurysm or if it just made us aware that it was there,” Cynthia says.

Elianna received at-home physical therapy for a few months, and she returns to the Children’s Center monthly for occupational therapy. Due to long-term effects of the bleeding from the aneurysm, Elianna, now age 10, works closely with her fifth-grade teachers to regain and strengthen her reading and writing skills.

“Johns Hopkins Children’s Center is my second home and second family,” Cynthia says. “It’s been a long road, but they gave our daughter back to us.”