Clayton: One in a Million 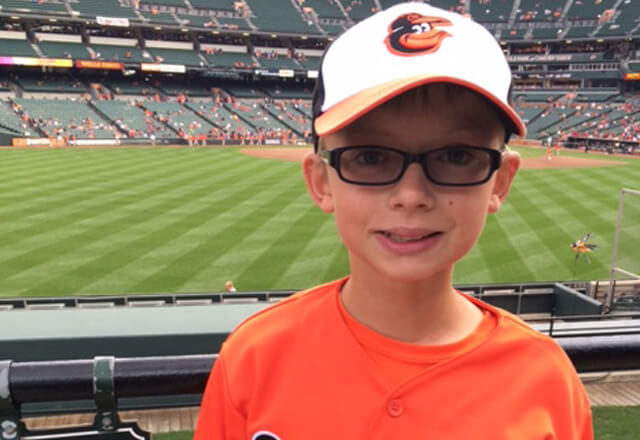 Clayton Cowan, of Fulton, MD, was born with a rare disease called chronic granulomatous disease (CGD), which occurs only in one out of a million people.

The condition is caused by a glitch in the immune system that renders the body highly vulnerable to germs and results in recurrent chronic infections, some of which can be life-threatening.

Clayton was not diagnosed until he was 2 years old and had a severe, life-threatening lung infection. He was taken to Johns Hopkins Children's Center where "the brilliant Dr. Howard Lederman had a diagnosis for us within 48 hours," says Clayton's mother, Marty.

Clayton spent three weeks at the Johns Hopkins Children's Center while doctors determined the appropriate course of treatment. Over the years, the Cowans have been vigilant and watched for any signs of infection. If Clayton has a fever for more than two days, he needs to undergo blood tests and X-rays to rule out serious infection.

The greatest threats to Clayton's health are recurrent bacterial and fungal infections. He takes antibiotics and antifungal medication every day to prevent them.

He also receives interferon-gamma injections three times a week to boost his immune defense, but this is definitely something he doesn't look forward to.

After months of consideration, Clayton's parents, Marty and John, asked 12-year-old Clayton what he wanted to do, and the normally indecisive Clayton looked his parents in the face and surprised them with a decisive "I think we should go for it."

This presented a new dilemma-the need to find a match to donate the right bone marrow for Clayton. Luckily, Clayton's10-year-old brother Graham is a match and has offered to undergo the painful surgery.

Clayton will begin chemotherapy in May 2015, followed by the bone marrow transplant operation approximately 2-weeks later. If everything goes according to plan, Clayton will be finished with this process and return to school by January 2016.

Clayton is an avid Baltimore Orioles baseball fan, and his favorite subject in school is science. He is an incredibly smart 6th grader, who continues to impress his parents and teachers with his intelligence and thirst for knowledge.