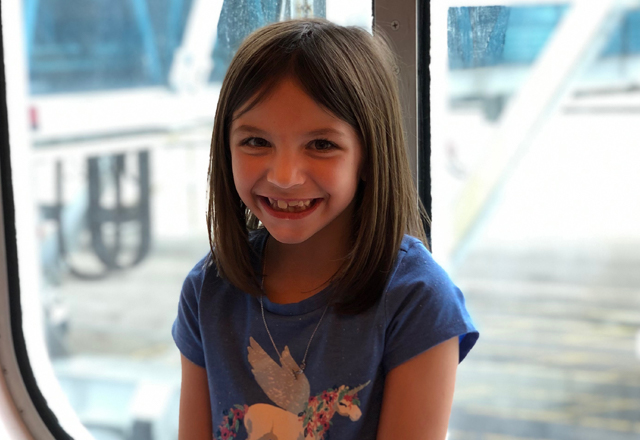 Ava was living a healthy life until the 6-year-old awoke one day with extreme pain in her knee. After monitoring Ava all morning, her mom, Kristina, realized her daughter couldn’t put any pressure on her leg. Kristina brought Ava to a pediatrician.

After an X-ray and ultrasound, the pediatrician suspected she might have a septic knee infection and could be at risk of going into septic shock. The doctor called an ambulance that rushed Ava and Kristina to Johns Hopkins Children’s Center.

“The word septic is obviously a very scary term because septic shock can be deadly,” Kristina says.

At the Children’s Center, Ava was immediately wheeled into surgery to test her knee’s fluid and determine what kind of infection she had. After the operation, doctors admitted Ava to do a full clean out of her knee to remove all of the infection.

Doctors couldn’t specifically identify the cause of the bacteria in Ava’s knee. They treated her for multiple potential sources of infection while waiting for definitive test results to come back. When an answer arrived, it was nothing that Kristina expected: Ava had Lyme disease.

“She may have only had it for three months. I never knew Lyme could cause issues so quickly,” Kristina says.

While Ava recovered from surgery, her family dealt with the shocking news that because of the infection, she wasn’t able to walk. However, thanks to physical therapy, Ava relearned how to walk and went home a week after surgery with antibiotics to cure her Lyme disease.

“I was relieved, in a sense, that we could go home with pills instead of IVs,” Kristina says. “Ava could be treated the rest of the time at home and just come in for physical therapy.”

Ava left the Children’s Center with just a small scar on her knee, which her mom says is a small price to pay for her daughter to be healthy again — and Kristina is thankful the disease was caught early enough for treatment to be effective. Ava, now 7 years old, is back to playing sports and is Lyme disease free.