What is the Mitral Valve?

What is Mitral Regurgitation or Insufficiency?

Mitral regurgitation or insufficiency is a condition whereby the mitral valve permits blood from the left ventricle to leak back towards the lungs. Mitral regurgitation is most often caused by congenital malformation or damage due to trauma, infection, or heart failure. Depending on the severity of the leakage, this situation can lead to progressive lung congestion and heart failure. Symptoms commonly include shortness of breath, decreased exercise endurance, and swelling of the extremities.

How is Mitral Regurgitation Treated?

The severity of mitral insufficiency can sometimes be reduced with medications, however the most definitive treatment involves surgical repair of the valve or replacement with a prosthetic valve.

Although this approach provides excellent access to the heart, the resulting wound requires several months to heal completely, an extended recovery period with substantial activity restrictions, and can be subject to serious complications including infection, breakdown, and even death.

What are Mitral Valve Repair Techniques?

1) Frequently, posterior leaflet prolapse results from a ruptured chord that normally prevents the leaflet from prolapsing.

2) In this repair, the prolapsing segment of the leaflet is removed along with its ruptured chord.

3) The diameter of the mitral valve is slightly reduced to accommodate the resected portion. The cut edges of the leaflet are sewn together. 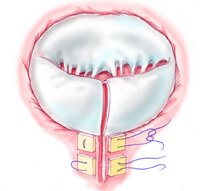 4) A fabric ring is placed around the repair to reinforce it and enhance its durability. 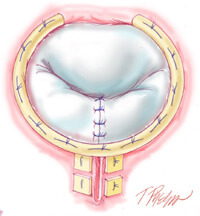 The leading edges of the prolapsing leaflets are identified. 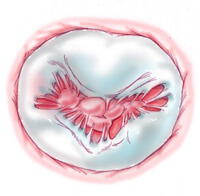 The leading edges are lined up. Sewing them together at their midpoint prevents the leaflets from prolapsing. 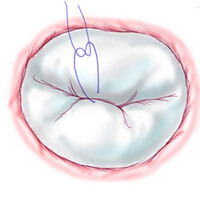 The center portion or “scallops” of the two leaflets are sewn together. Blood can still flow through the valve in either side of this “double-barrel arrangement.” 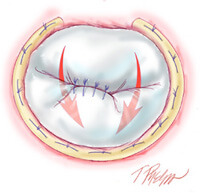 In cases where the mitral valve leaks between the leaflets because the diameter or annulus of the valve is too dilated, simply placing a constricting annuloplasty band can often bring the leaflets into correct position. 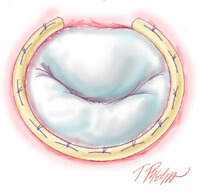 What are Minimally-Invasive Approaches for Mitral Valve Repair?

Recently, new less invasive approaches for mitral valve surgery have been developed centered upon accessing the valve through much smaller incisions and without cutting the breastbone. These minimally-invasive operations are performed with the use of specialized hand-held instruments or a robotic device. There is mounting evidence to suggest that, compared to patients undergoing standard open-chest cardiac operations, these minimally-invasive approaches translate into

What is Robotic Mitral Valve Repair?

What is “Mini-Mitral” Valve Repair?

In this approach, the mitral valve is approached through a small 3” incision made between the ribs on the right side of the chest. Specialized hand-held instruments are used to work on the mitral valve through this small incision. Although the ribs are gently spread, no bone is actually cut and the breastbone is left intact. This approach still requires use of the heart-lung machine which is connected to the circulation through a 1”-2” incision made in the right groin crease. Many recent studies have confirmed that, performed correctly by qualified surgeons, this approach is safe with short- and long-term results that are comparable to those of standard approaches. In fact, significantly shorter recovery times and lower wound complication rates have been observed with this minimally-invasive approach.

In most cases, hospital stays average between three and four days after minimally-invasive mitral valve repairs compared to six or more days with standard approaches. Most patients who undergo standard chest-splitting cardiac operations are restricted from activities including lifting, sports involving arm involvement, and driving for six to 8 weeks. In comparison, patients undergoing minimally-invasive operations are free to engage in any of these activities as early as one to two weeks after surgery.