My cardiologist and the Hopkins genetics program were able to pinpoint the cause of my frequent heart rhythm problems. 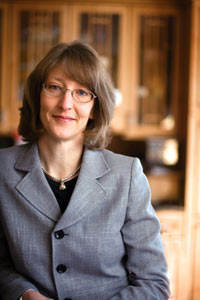 Kim Bauhs was diagnosed with Long QT Syndrome after suffering a heart attack.

I was 46—feeling perfectly healthy and about to give a talk at a business meeting—when I fell to the floor in cardiac arrest. The doctors at the hospital where I was taken diagnosed a heart rhythm problem and put a pacemaker in my chest that would send an electrical shock to my heart if I had another episode.

At first, I thought things were under control. But six months later, after my defibrillator gave me eight full shocks in a single day, my Johns Hopkins cardiologist recommended that I undergo genetic testing to pinpoint the cause of my condition.

Now, thanks to him and the Hopkins genetic program, I know that I have what’s called long QT syndrome, even though it doesn’t show up on my stress tests or EKGs.

With the right treatment and the lifestyle changes he prescribed for me, I have gotten my life back.