What is congenital diaphragmatic hernia?

Congenital diaphragmatic hernia (CDH) occurs when there is a hole in the diaphragm, which is the thin sheet of muscle separating the chest from the abdomen. When this gap forms during a fetus’s development in the womb, the bowel, stomach or even the liver can move into the chest cavity. The presence of these abdominal organs in the chest limits the space for the lungs and can result in respiratory complications. Because CDH forces the lungs to grow in a compressed state, several aspects of their function may not develop normally until after the birth of the baby. 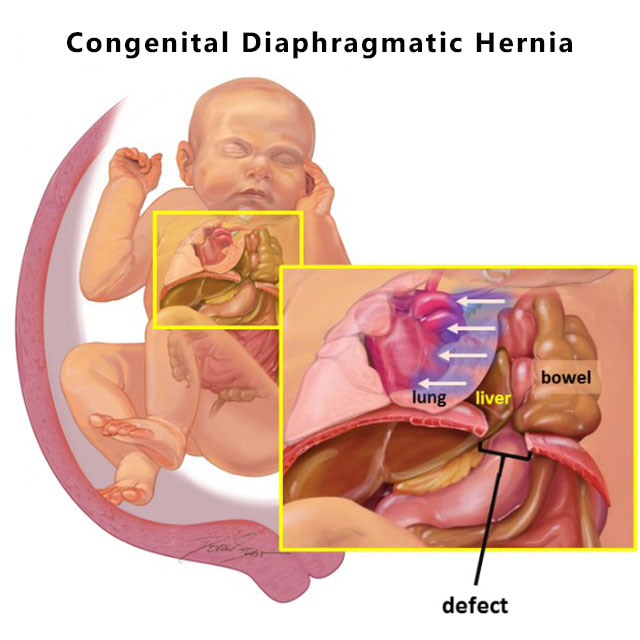 A baby with CDH may suffer from a form of underdeveloped lungs known as pulmonary hypoplasia.

When pulmonary hypoplasia occurs, there are abnormalities that impact:

Before birth, the placenta takes over all functions of the lungs so a fetus can grow in the womb without suffering low oxygen levels (hypoxemia). However, after birth, the baby depends on the function of the lungs, and if their underdevelopment is severe, artificial ventilation techniques will be necessary. CDH can appear on the left side, right side or rarely on both sides of the chest. CDH occurs in about 1 in 2500 live births.

Dr. Jena Miller discusses treatment and care provided by the Johns Hopkins Center for Fetal therapy for expecting mothers whose babies have been diagnosed with congenital diaphragmatic hernia (CDH). She discusses how it is diagnosed, options for treatment and subsequent follow-up.

In a growing embryo, the diaphragm is completely formed by 10 weeks of gestation. However in cases of CDH, the process that leads to formation of the diaphragm is disrupted. Once there is a hole present in the diaphragm, abdominal contents can move into the chest. This is called herniation. Because fetal activity and breathing movements become more frequent and vigorous as a pregnancy continues, the amount of herniation can fluctuate or increase.

Sometimes CDH is caused by a problem with a baby’s chromosomes or by a genetic disorder. If this is the case, the baby may have additional medical problems or organ abnormalities. In other instances, CDH may occur without an identifiable genetic cause. This is called isolated CDH, and under these circumstances the primary concern is the degree of pulmonary hypoplasia caused by the defect. In order to determine if CDH is isolated and to provide the most correct information about the disease, genetic testing is required.

Detection of CDH may come during a routine ultrasound, which may reveal excess amniotic fluid and/or abdominal contents in the fetal chest cavity. To confirm a prenatal diagnosis of CDH, doctors may perform a very detailed ultrasound, conduct testing of the fetus’s chromosomes and take measurements of its lung size. During the ultrasound examination, doctors focus on specific findings that may point to the presence of a syndrome. The genetic testing is performed by amniocentesis.

The lung size is then measured and compared to the expected size at this stage of a pregnancy. This can be done by measuring the lung area to head circumference ratio (LHR) or comparing the observed/expected LHR (o/e LHR). It is also important to determine whether the liver has also moved into the chest. Based on these measurements, specialists at the Johns Hopkins Center for Fetal Therapy can grade the severity of CDH as mild, moderate or severe. Specialized imaging techniques including magnetic resonance imaging (MRI) are used to help achieve the most accurate assessment.

Congenital diaphragmatic hernia may also be diagnosed after birth — often if a newborn is having trouble breathing.

Preventing and Treating Birth Defects: What You Need to Know

While some birth defects can be prevented through prenatal care, it's important to know what treatments may exist if your fetus is diagnosed with a birth defect.

Watch Our Webinar: CDH - Caring for You and Your Baby from Prenatal Diagnosis to Infancy

The diagnosis of a congenital diaphragmatic hernia (CDH) prior to delivery can be confusing and overwhelming. Learn about the Johns Hopkins Fetal Center and our family-centered approach to care from Ahmet Baschat, director of the Center for Fetal Therapy, pediatric surgeons Shaun Kunisaki and Alejandro Garcia and pediatric cardiologist Melanie Nies.