A 48-year old male Jehovah’s Witness with a history of hemophilia type A, presented a year after a total hip replacement with ongoing right side hip pain. After years of treatment with factor VIII concentrates, he had contracted HIV and hepatitis C, and has been taking highly active antiretroviral therapy (HAART) medications. When he presented he had a known infected hip prosthesis years after having a total hip replacement. Initially his hemoglobin level was 10 g/dL, which was well below the chosen hemoglobin target to allow him to undergo what was believed to be a high blood loss surgical procedure. A two-stage procedure was planned, first to remove the infected prosthesis followed by intensive antibiotic therapy. Revision of the hip implant was planned for after the infection was cleared. In order to optimize his hemoglobin for the surgery he was placed on intravenous iron sucrose 200 mg every day, along with erythropoietin 20,000 units intravenously as well, every day. After 3 weeks his hemoglobin was up to 13.1 g/dL and the surgery was scheduled.

To prepare the patient for surgery, his hemophilia was treated by Hematology (Dr. Michael Streiff), who prescribed factor VIII concentrate to be given intravenously to obtain a factor VIII level that was at least 50% of a normal level. After the patient was given general anesthesia and intra-arterial catheter was placed for continuous blood pressure monitoring, we set up an autologous blood salvage system (Cell Saver) to allow us to return the shed blood back to the patient. Although infections are a relative contraindication to autologous blood salvage, the plan was to use a special filter (Leukoreduction filter) to remove any residual bacteria remaining in the salvaged blood. The filter could be placed in-line upon giving the blood back to the patient. During the long difficult surgery, the patient experienced 2,500 mLs of blood loss, which is approximately ½ of the total circulating blood volume (5 liters in the average sized adult). The 4-hour surgical procedure went smoothly and during the case, 750 mLs of salvaged blood was returned to the patient. This volume of returned salvaged blood is about 30% of the total blood loss (2,500 mLs) which represents a very effective recovery of shed blood since the returned blood is hemoconcentrated by about 2-3 fold, relative the patient’s hemoglobin during surgery. A special test was used (Thromboelastogram) to monitor the patient’s coagulation status during the procedure. Shown below on the bottom right, this test revealed that coagulation was normal, and that the Hemophilia condition was optimized by Hematology, prior to the start of surgery. No additional factor VIII was required until the postoperative period. The patient’s postoperative hemoglobin level was 7.3 g/dL, followed by a nadir hemoglobin level of 5.7 g/dL on postoperative day #3. After 8 days of aggressive treatment with intravenous erythropoietin and iron sucrose, he was able to leave the hospital on postoperative day #8 with a hemoglobin level of 7.1 g/dL. A month later when he visited the orthopedic clinic for followup his hemoglobin level was 12.5 g/dL. The plan is to bring him back for a revision hip replacement in 3 months. 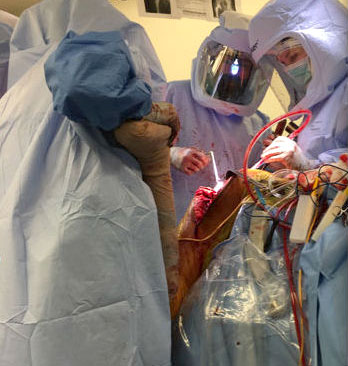 Dr. Khanuja and his team 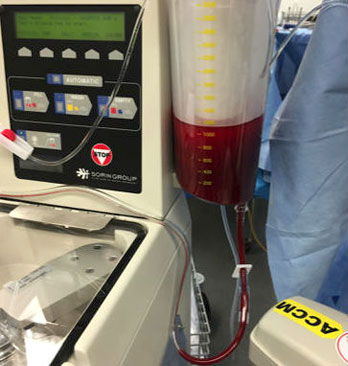 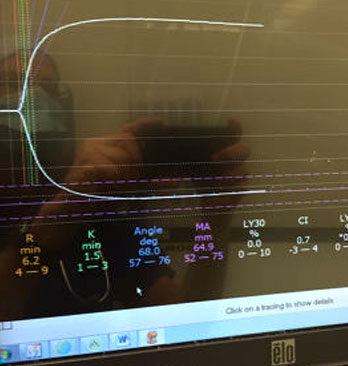