Following an episode of passing out, a 53 year-old Jehovah Witness with a past history of HIV on highly active antiretroviral therapy (HAART), anemia of chronic disease, obstructive sleep apnea and hemorrhoids was diagnosed with pulmonary embolus. Ultra sound of legs did not show any clots, patient was placed on xarelto and rivaroxaban. About a month later, the patient presented with unbearable pain which he confused with hemorrhoids which turned out to be an anal abscess on the left side. By the 3rd day into hospitalization the abscess broke open and drained out pus and blood.  An episode of blood discharge following a bowel movement along with fevers, chills and night sweats for several weeks prompted him to visit the emergency room where it was diagnosed to be a peri-rectal abscess now with a fistula formation. It was found that his blood was “too thin”. An ultrasound of his legs was repeated which revealed clots in his legs and an IVC filter was placed.  A CT scan was also performed that showed extensive retroperitoneal, bilateral pelvic and inguinal lymphadenopathy. Fine needle aspiration of enlarged left inguinal lymph node was done.

MRI of pelvic region confirmed extensive lymphadenopathy in retroperitoneal, inguinal and pelvic wall area. He was also found to have bilateral non-occlusive but large venous thrombi involving the common femoral veins, extending into the bilateral external iliac veins and possibly common iliac veins.  FNA pathology came back as “classic Hodgkin’s lymphoma” and was then consulted for further work up.

There was an initiation of therapy for lymphoma due to active infectious conditions. As for anemia, since he is a Jehovah’s Witness, he was given 7 days of IV iron (200 mg iron sucrose/day), EPO (20,000 units/day SubQ), folic acid 1 mg/day IV, and B12 100 mcg/day subQ. His counts did not respond much to these measures. He was started on AVD for lymphoma (No Bleomycin due to low performance status and inability to perform pulmonary function tests), fosaprecipitant was given before treatment to avoid Decadron and Zofran every 8 hours. Patient tolerated the therapy but there was a significant drop in his Hb level from 7.1 to 4.9 within a week from the start of the therapy. Despite the Hb drop patient felt well and performance status and appetite improved. 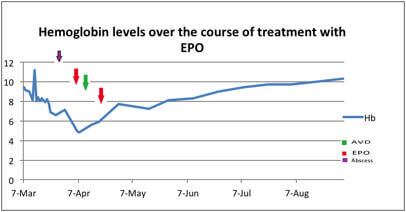 Response to Erythropoietin in a Patient with Chemotherapy-induced Anemia

He was started on daily EPO to boost his counts which was administered intravenously to increase absorption. The patient was discharged and continued to receive subsequent cycles of chemotherapy as an outpatient without significant complications.  EPO was give initially 3 times per week, but was then tapered off due to improvement in his hemoglobin. Given his history of HIV, the patient continues to receive Neupogen (Filgrastim) on days 3, 5 and 7 after each dose of chemotherapy, in order to increase his neutrophil counts.  His mid treatment PET after cycle 2 showed a complete metabolic response indicating tumor remission.

Over the course of treatment, the patient’s functionality has improved markedly. He now ambulates with the help of a cane, due to neuropathy in his toes from the treatment.  He has had no fever, chills, recent illnesses or abdominal pain.