A 13 year-old previously healthy girl who is one of Jehovah’s Witnesses, with a history of malaria 4 years ago, presented with fever, headache, nausea, vomiting and abdominal pain after a recent trip to Liberia to visit family. During her visit, she was taking prophylactic chloroquine but she missed a few doses. Of note, she was recently admitted to a local hospital a week prior to this admission where she was treated with supportive care and discharged home on a bland diet.

Upon admission her core temperature was 103°F and she was hypotensive (BP 70/40). Her hemoglobin level was 10.0 g/dL, white blood cell count 3,000, with a platelet count of 22,000. She was given 3 liters of IV normal saline and started on a dopamine infusion to treat hypotension.  Her hemoglobin level after hydration was 6.6 g/dL.  She was admitted to the pediatric ICU with concern for impending circulatory collapse. The Pediatric service ordered a peripheral blood smear which was concerning for Plasmodia Falciparum (Malaria). The slide was read as 7% parasitemia and the diagnosis of severe malaria was entertained – image below shows parasites inside red blood cells. 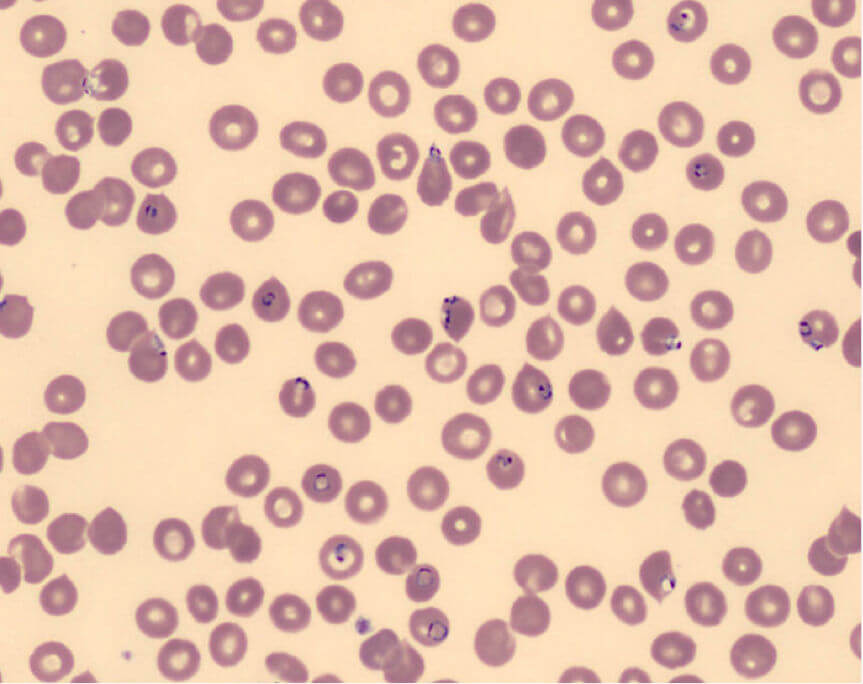 After consulting with Pediatric Infectious Disease, treatment was begun with IV quinidine gluconate and Clindamycin. Blood draws were limited to essential lab tests using pediatric phlebotomy tubes to minimize iatrogenic blood loss.  Serial ECGs were obtained to monitor for quinidine toxicity. Despite her low hemoglobin, her and her family’s wishes to avoid blood transfusion were honored.  By day 4 she was afebrile, and her platelet count was up to 111,000. Given her gastrointestinal symptoms, a stool culture was done to rule out parasitic infections such as Giardia.  On day 5 she was discharged on oral quinine 600 mg (10 mg/kg/dose) three times per day, and clindamycin 20 mg/kg/day, both of which were to be continued for 7 days.  After ruling out G6PD enzyme deficiency, Primaquine 53 mg, given orally every 24 hours was started and continued for 14 days for eradication of possible Plasmodium ovale hypnozoites. She was also sent home on oral iron supplements, B12, and folate for her anemia. For future travel to Liberia, Infectious Disease recommended that she take prophylactic doxycycline, atovaquone-proguanil, or mefloquine for malaria prophylaxis, but not cholorquine.