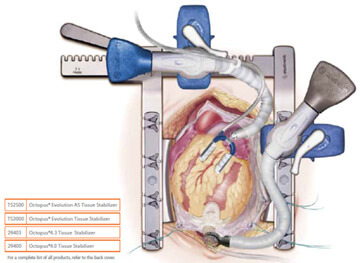 A 66-year old male Jehovah’s Witness patient was brought to the hospital with chest pain, and referred for a cardiac catheterization. He had a positive nuclear stress test that showed reduced blood flow to the left ventricle with a high suspicion for coronary artery disease.

Dr. John Conte performed the coronary bypass surgery. Of interest is the fact that in 1999, Dr. Conte published a case report of the first ever successful bloodless lung transplant in a Jehovah’s Witness patient. In this case presented here, he decided the patient would be best served by performing an "off-pump" cardiac surgery where the heart lung bypass machine is not used. This technique reduces the blood loss that is commonly associated with the bypass machine, since with traditional bypass a substantial amount of the patient’s blood is left behind in the circuit of the machine and is unrecoverable.

The 4-hour surgery went very well. The saphenous vein from his right leg was harvested using an endoscopic approach. Compared to the traditional technique, this method uses a smaller incision to harvest the vein. The internal mammary artery and the saphenous vein were both used to provide blood flow to the narrowed coronary arteries. A special “octopus retractor” was used to stabilize the heart because during off-pump surgery the heart continues to beat (thus the term “beating heart surgery”), unlike the traditional on-pump method where the heart is arrested and completely still. The hemoglobin level was 13.8 before surgery and 13.0 three days later when the patient was discharged from the hospital.  Two weeks after the surgery, the patient attended the open house for our Bloodless Medicine and Surgery Program and looked and felt "as good as ever".

A 46-year old female Jehovah’s Witness patient had severe aortic valve regurgitation along with an ascending aortic aneurysm. She had been seen at two other major academic centers in hopes of having a valve replacement along with repair of her “aortic root” (the section of aorta that joins the heart above the aortic valve), but was unable to find a team of physicians that would perform the surgery without blood transfusion.

Dr. Duke Cameron, the former Chief of Cardiac Surgery saw her along with Dr. Steven Frank, Director of the Johns Hopkins Bloodless Medicine and Surgery Program. With the patient and her family present, they reviewed the echocardiogram and cardiac catheterization report from another hospital.  At the time, a discussion took place about the various methods of blood conservation and the various alternatives to transfusion. The patient and her family agreed that blood salvage (Cell Saver) and intraoperative autologous normovolemic hemodilution (IANH) were acceptable options. The patient was sent to the lab for routine blood tests and her hemoglobin level was suboptimal (13.0 g/dL) for this type of surgery. One complicating factor was the patient’s body weight of 95 lbs, which means that her total blood volume and red cell mass was about ½ that of a normal sized adult.

The patient was scheduled for a 3-week course of erythropoietin and intravenous iron at the infusion clinic at Johns Hopkins. The patient responded nicely to the treatments and her hemoglobin level increased to 15.1 g/dL, at which time the surgery was scheduled.

After the patient was under general anesthesia, 2 units of her own blood were removed as part of the IANH technique. These 2 units would be given back to her near the end of the surgery. During surgery, the Perfusionist, who operates the heart lung machine, was able to use a method called retrograde autologous prime (RAP), whereby the patient’s own blood is used to prime the circuit in an effort to conserve the patient’s blood volume.

After the surgical procedure, the patient was noted to have some cardiac ischemia (deficient blood flow to the left coronary artery).  She was taken to the cardiac cath lab where a coronary stent was placed by an interventional cardiologist into her left main coronary artery. The next day she was weaned of the ventilator and she recovered nicely. Our Bloodless team Hematology consultant, Dr. Linda Resar guided her postoperative therapy which included IV iron and erythropoietin. She was discharged from the hospital with a hemoglobin of 8.0 g/dL, and she and her family had a Baltimore crab dinner before returning home to Roanoke, VA.