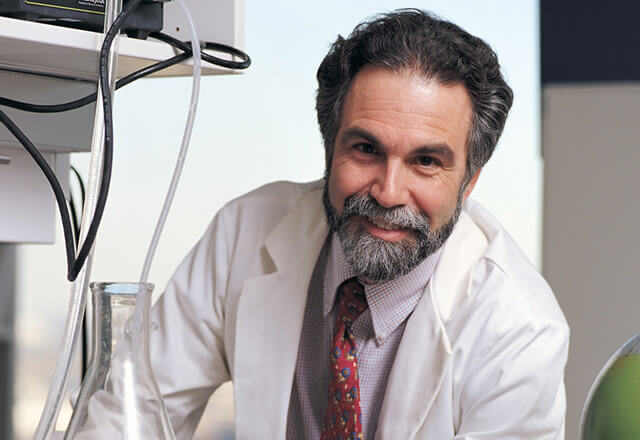 Gregg L. Semenza, M.D., Ph.D. of the Johns Hopkins University School of Medicine was awarded the 2016 Albert Lasker Basic Medical Research Award by the Albert and Mary Lasker Foundation. Semenza, along with co-award winners William G. Kaelin, Jr., M.D. of the Dana-Farber Cancer Institute and Peter J. Ratcliffe of Oxford University, were recognized for their “discovery of essential pathways by which human and animal cells sense and adapt to the presence of oxygen.”

In 1992, Semenza and co-authors announced their ground-breaking discovery of hypoxia inducible factor 1 or HIF-1, which helps cells cope with low oxygen levels. The discovery has far-reaching implications in for understanding low oxygen health conditions like coronary artery disease and tumor growth. Since then Semenza has identified genes turned on by HIF-1 that control energy production, the making of red blood cells and the growth of blood vessels. He currently is studying the role of HIF-1 in cancer, ischemia and chronic lung disease, the most common causes of mortality in the U.S. population.

A Timeline of Discovery (Slideshow) Gregg Semenza, MD, Ph.D., and Stylianos Antonarakis, MDDCh, identified two enhancers - DNA sequences near genes that bind proteins to help control the gene - that work specifically when oxygen is low. The other enhancers were found on either side of the gene for erythropoietin, a hormone that signals for more red blood cells to be made. Once enhancer turns the gene on in the kidneys and the other in the liver. Hypoxia is a condition when the body’s cells are deprived of oxygen. Gregg Semenza, MD, PhD, and Guang Wong, Ph.D., aptly named the protein that binds the enhancers of the erythropoietin gene in response to low oxygen hypoxia inducible factor 1 (HIF-1).

HIF-1 protein levels increased when oxygen levels were reduced in all mammalian cell lines tested, suggesting that turning up HIF-1 levels may be a universal response to hypoxia. The Semenza lab discovered that HIF-1 turns on the gene for VEGF, which controls vascularization--the production of new blood vessels. Vascularization is important for healing during an injury, but it is also required for tumors to grow and spread throughout the body.

HIF-1 is found to turn on an oncogene—a gene that when dysregulated leads to development of cancer. This provides the first evidence that cancer cells need HIF-1 to adapt to low oxygen environments. The Semenza lab shows that HIF-1 is essential for survival of mouse embryos. Without HIF-1, the heart, blood vessels and blood don’t develop.

HIF-1 is found to be highly expressed in many human cancers. This suggests that inhibiting HIF-1 may be a potential therapeutic for the treatment of cancer. Turning on extra HIF-1 with chemicals reduces the amount of damaged tissue in the brains of mice that have had strokes. This suggests therapeutics may be developed that can reduce the damage left by strokes.

Injecting a virus engineered to make HIF-1 causes blood vessels to grow in mice. This suggests that increasing HIF-1 levels may be useful in patients with coronary artery disease or leg circulation problems. Hopkins researchers report that inherited differences in the gene for HIF-1 influence the body’s response to coronary artery disease.

Semenza’s team discovers that two drugs, digoxin and acriflavine, block HIF-1 from making VEGF and other proteins that are necessary for tumor growth in animal models. Both drugs have been used in the past for other purposes and can now be tested in cancer patients.

2009: HIF-1 may be used to treat patients with poor circulation If blood supply is restricted, tissue damage occurs. One of the consequences of aging and diabetes is poor circulation. Semenza’s team treated diabetic mice with HIF-1 gene therapy, which helped improve blood flow to their limbs and prevented tissue damage. In a separate experiment they combined HIF-1 gene therapy with blood stem cells to improve circulation in very old mice and prevent limb loss.

2014: HIF could be key to treating resistant cancer Semenza’s team found that a common chemotherapy drug caused triple-negative breast cancer cells to thrive by dialing up levels of HIF. The good news was that treating mice with a combination of a HIF inhibitor and chemotherapy shrank their triple-negative tumors by 30 percent more than treatment with paclitaxel alone.

Tumors face a central problem: as they grow larger, cells near the middle are increasingly cut off from the body’s oxygen supply. Since HIF senses oxygen levels, it’s critical to stimulating the growth of new vessels to supply the tumor. Semenza and others are working to find and test therapeutics that would block HIF, which may prove a fatal chink in the armor of some tumors.

Relative to people without the disease, patients with type 2 diabetes face a high risk of losing a limb to amputation due to poor circulation. Semenza’s work suggests HIF-1 could be the key to restoring circulation before it’s too late. By treating diabetic mice with a virus engineered to increase HIF-1 production, his team was able to increase blood flow to their limbs.

Researchers are at work on potential therapies that would change HIF-1 activity to treat conditions such as cancer, diabetes and stroke. For example, a drug known as GSK1278863 is being clinically tested as a treatment for patients with anemia associated with chronic kidney disease. The drug represses HIF to maintain hemoglobin levels.

Dr. Semenza on the Discovery of HIF-1

Gregg Semenza, M.D., Ph.D. talks about his seminal discovery of the protein HIF-1 in the 1990s, its potential applications to treating anemia and cancer, and life as a researcher.

The Joy of Scientific Discovery

Gregg Semenza, M.D., Ph.D., of the Johns Hopkins McKusick-Nathans Institute of Genetic Medicine on the excitement and unpredictability of being a scientist.

While chemotherapy attacks and kills 99 percent of breast cancer cells, it leaves behind chemotherapy-resistant cancer stem cells, which can later cause metastatic tumors. Dr. Gregg Semenza’s team has identified a way to overcome the resistance of cancer stem cells to chemotherapy, completely eradicating breast tumors in mice.