The experienced radiation oncology team specializes in treating a variety of cancers with a number of radiation therapy options, including proton therapy. All these therapies use high energy, penetrating waves or particles to destroy cancer cells or keep them from reproducing. Your medical team will determine the most effective options for you.

Our treatments fall in several types:

Proton therapy is a form of targeted radiation treatment that uses energy from positively charged particles called protons. Protons very precisely zero in on tumors, delivering most of their cancer-fighting energy directly to cancer cells while minimizing radiation exposure and damage to neighboring healthy tissue and organs. The therapy reduces the risk of late effects after treatment.

Because of its precision, proton therapy makes it possible to treat cancers near delicate organs, such as the spinal cord and heart, and offers a new treatment approach for recurrent cancers. It also provides a safe and effective way to treat cancers that present a challenge because of their location in the body, such as brain cancer and cancers in the eye or base of the skull and neck.

Brachytherapy is a targeted, high-dose radiation treatment delivered via radioactive “seeds” that are placed directly in or near the tumor or via an applicator device placed at the tumor site using a special needle or catheter. The seeds may be inserted just for several minutes or hours and then removed, or left inside the body to release radiation over time. Brachytherapy cannot be used for every type of cancer but may reduce side effects and allow for shorter treatment times, providing patients with a better quality of life.

Specific types of brachytherapy offered by Johns Hopkins include:

External beam radiation delivers a beam of high energy X-rays to a patient’s tumor site to destroy cancer cells. The technique gets its name from the fact that the beams come from an external source (a machine called a linear accelerator) and are aimed at the site of the tumor.

There are several types of external beam radiation used at Johns Hopkins. They include:

This cancer treatment uses tiny glass or resin beads called microspheres to deliver radiation to a tumor through the bloodstream. These particles are placed inside blood vessels, where they travel to the tumor and deliver a high dose of radiation.

One type of radio embolization used at Johns Hopkins is TheraSphere, a treatment for liver cancers. Doctors infuse millions of particles into the arteries that feed liver tumors. Then, the particles lodge themselves by the tumors, emitting radiation. 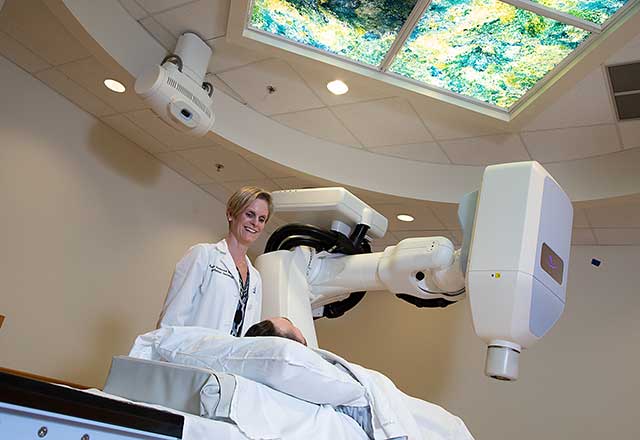 Despite the name, this treatment is a nonsurgical radiation therapy that can be used as an alternative to invasive surgery. The technology delivers multiple radiation beams from different angles and planes. Three-dimensional  images are used to determine the exact location of the tumor. This treatment can treat very small tumors or those located in hard-to-reach places.

This treatment administers very high doses of radiation using several beams of different intensities, and aimed at different angles to target the tumor. The therapy can be given as a single dose or up to several doses.