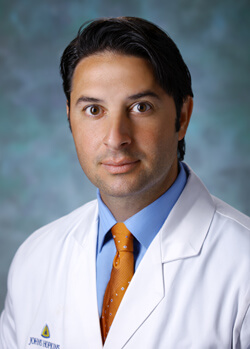 Trinity Bivalacqua: “This test has great potential to be lifesaving.”

It’s not a substitute for surveillance cystoscopy and transurethral bladder biopsy, but a new urine test developed at Johns Hopkins may soon become part of the arsenal for detecting bladder cancer, picking up recurrent cancer and predicting aggressive tumors, says Trinity Bivalacqua, director of urologic oncology.

The test looks for mutations in the promoter of the telomerase reverse transcriptase (TERT) gene. A multidisciplinary team led by genitourinary pathologist George Netto, along with scientists from the Ludwig Cancer Research team, and Bivalacqua and Mark Schoenberg,  found a very high prevalence of TERT promoter mutations in a wide range of precursor bladder tumors.

“We knew it had the potential to be useful in early diagnosis,” says Bivalacqua. “Then we wondered if this biomarker could also pick up the return of bladder cancer after treatment.” The scientists looked for TERT mutations in early tumors, follow-up urine samples from patients who developed recurrent bladder cancer and patients who did not have recurrent cancer. Among patients whose tumors harbored TERT promoter mutations, the same mutations were present in follow-up urine samples in those who developed a recurrence—but not in the urine of patients whose cancer did not recur.

“The real value of this test,” Bivalacqua notes, “is to be able to predict aggressive cancers from the more indolent cancers that don’t need invasive treatments.” This work was published in Cancer Research.