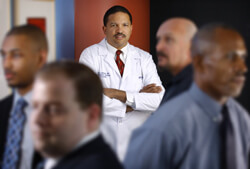 “Men often think it’s just a sex drive thing,” says Kevin Billups, “but a lot of what we see is related to other common conditions.”

Erectile dysfunction (ED) and low testosterone might be the symptoms that get men through the door to see urologist Kevin Billups, director of the Men’s Health and Vitality Program. But they’re generally not the only things he ends up treating. “The first thing I do,” he says, “is point out that these problems don’t occur in a vacuum. What else is going on?”

For example, if a man between 40 and 50 has ED, growing evidence suggests that he could have a nearly fifty-fold increased risk of developing heart disease over the next 10 years. Billups refers many of his patients to general urologists, primary care physicians, sleep specialists or preventive cardiologists for further testing when needed. “We’re offering very integrated, multidisciplinary care.”

Low testosterone is another cause of concern for many men. It doesn’t help that many have seen advertisements for testosterone-boosting supplements promising to cure all—except, Billups notes, the underlying cause. “Men think it’s just a sex drive thing, but a lot of what we see is related to other common chronic conditions. Treating that one symptom without finding out the whole story would not be a good idea.” Diabetes or even prediabetes can lower testosterone; so can a big gut, he adds. “Having a waist circumference greater than 40 inches lowers testosterone. Fat, especially belly fat, makes the enzyme aromatase, which converts testosterone to estrogen.

The most common symptoms of low testosterone are ED, fatigue, feeling sluggish, loss of strength or endurance, daytime sleepiness, even cognition issues. “We can document with a blood test that your testosterone is low, but what’s going on with your cardiovascular status, your thyroid? Is there any depression going on?  If a man has obstructive sleep apnea and low testosterone, he really needs to get the apnea addressed first, because that can make the testosterone worse.”