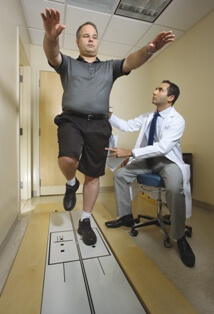 As a member of the military for nearly 25 years, Joe Posato, 49, of Crofton, Maryland, served in many combat zones. His active service spanned three overseas combat tours of duty, including Desert Shield/Desert Storm and Operation Iraqi Freedom. Posato retired from active service only after suffering a shoulder injury during a deployment to Fallujah, Iraq. Neither his injury nor his years of service, however, prepared him for the challenges he would face after a baseball game back home sent him to Suburban Hospital, the designated Trauma Center for Montgomery County.

It was during a game of the DC Men’s Senior Baseball League in June 2011 that Posato’s love of baseball would change his life forever. He was on the mound and had just thrown a curveball, only to be hit in the side of the head by the batted ball. He woke up on the ground and was rushed by ambulance to Suburban Hospital, where a CT scan revealed skull and facial fractures, as well as bleeding on the right side of his brain. He was admitted to the ICU for close observation.

“I served as a U.S. Army Ranger and never really got hurt,” he says. “After I was hit with the baseball, I spent two weeks at Suburban Hospital and I don’t even remember the first three days. For the first time in my life, I knew I was hurt.” Luckily for Posato, his admission to Suburban ensured not only that he would receive exceptional care, but also that he would have access to cutting-edge research in traumatic brain injury (TBI).

Suburban Hospital is home to an exciting research program initiated in October 2010 that includes the Trauma Head Injury Neuroimaging Classification (THINC) study. Suburban’s role in this study evolved from a unique partnership with the Center for Neuroscience and Regenerative Medicine (CNRM), a collaboration between the Uniformed Services University of the Health Sciences (USU) and NIH (namely, the National Institute of Neurological Disorders and Stroke, or NINDS, and the NIH Clinical Center).

Patients who come to the hospital with closed head injuries may be eligible for the study, which includes the use of advanced MRI technology, an enhanced form of imaging that is typically not available to TBI patients in other hospitals. “The gold standard of care for traumatic brain injury patients is the CT scan,” says trauma surgeon Dany Westerband, M.D., who headed the trauma team that evaluated and cared for Posato. “An MRI looks for more subtle changes in the brain, including vascular changes that are not seen on CT scans.”

“With TBI, even injuries that appear minor can have a huge impact on the patient,” says Lawrence Latour, Ph.D., the NINDS principal investigator for the THINC study at Suburban Hospital. His research focuses on the use of MRI imaging to determine the true extent of the initial injury as well as the degree to which the injury resolves or progresses.

“As many as 40 percent of TBI patients will have subtle abnormalities that may explain long-term symptoms,” says Ramon Diaz-Arrastia, M.D., director of clinical research at CNRM. “These abnormalities are only seen on an MRI. What’s novel about Dr. Latour’s work is that he is using early MRI imaging, which is rarely if ever done on these patients. MRI is very useful in identifying the pathological mechanisms that are at the core of these symptoms.”

“When it comes to brain injury, we still don’t know what the enemy is,” says Leighton Chan, M.D., chief of the Rehabilitation Medicine Department at the NIH Clinical Center. “We used to think of brain injury as an acute problem that might resolve. We now think that certain brain injuries may start an inflammatory cascade that could go on for years, resulting in a chronic degenerative process that can be debilitating for the patient.”

The goal of the THINC study and other TBI research is to develop both pharmacologic and non-pharmacologic therapies that will mitigate the damage caused by TBI as well as the long-term symptoms that TBI sufferers may experience. “TBI is the most common cause of medical disability and death in those under the age of 45,” explains Dr. Diaz-Arrastia, who also notes that increased attention to head trauma from the military as well as the sports community is now driving this research. “In order for us to develop therapies that will be effective, we have to be smarter about identifying the severity of an injury,” he says. “MRI is useful to patients in the short term because it allows us to provide more adequate counseling. In the long term, it will help us develop interventions to facilitate the recovery process.”

While it is not practical to use more advanced imaging in combat settings, researchers hope to use what is learned from studying civilians with TBI to find better ways to help the military population. “CNRM, which was funded by an act of Congress during the height of the wars in Afghanistan and Iraq, has brought together NIH, Walter Reed National Military Medical Center, the Uniformed Services University and Suburban Hospital in what may be the largest research collaboration involving TBI in the world,” says Dr. Chan. “Because NIH is right across the street from Suburban, we have access to real-world patients and we can follow these patients for years to find out what happens to them over time. This is a very complicated and ambitious project and Suburban is an integral part of it.”

As Joe Posato learned, access to a more sophisticated diagnostic tool was just the beginning of the help he would receive on his road to recovery. During his hospital stay, he experienced severe headaches. These were followed by additional symptoms, including an inability to sleep, irritability, a loss of concentration and memory problems. He had no idea that his TBI was responsible until he received a follow-up call from NIH 90 days after his discharge from the hospital.

Posato’s participation in the THINC study opened the door to additional support from NIH as well as opportunities to participate in other TBI research programs. He will be followed in a CNRM study at NIH for the next five years, during which time he will have access to new therapies aimed at aiding his recovery. “I have been educated about TBI and how to deal with its long-term effects,” he says. “The support from the NIH staff has been fantastic. TBI is the worst thing that has ever happened to me. It changed my life. But NIH is helping me learn how to deal with my life differently, and this study made it all possible.”

“It is very generous of an individual to volunteer for a study like this. Participation in clinical research is critical to advancing medicine and helping others,” says Dr. Latour. “At the same time, this study provides Suburban’s patients access to imaging techniques, world-class research and follow-up care that they wouldn’t have if not for this partnership.”