New research led by Johns Hopkins proves that four behavioral changes can dramatically increase your chances of a longer, healthier life. The study’s authors explain why and how 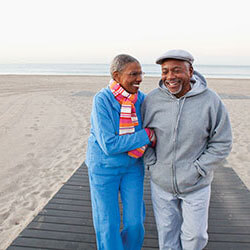 You want to lead a healthier lifestyle, but where do you start? Do you eat a bowl of granola? Take a yoga class? Give up coffee?

Maybe you feel as though you’re too old to make a difference. Or that you’ve been dealt a bad genetic hand. Well, maybe you shouldn’t even bother. Because most of what involves good health is beyond your control, right?

In an eight-year study of 6,200 men and women across the United States, a team of researchers—eight of them, including the lead authors, from Johns Hopkins—found that those who adopted four common-sense lifestyle behaviors protected themselves against coronary heart disease and the early buildup of calcium deposits in heart arteries.

The jaw-dropping finding of this study is this: People who engaged in these healthy behaviors reduced the chance of death from all causes by an astounding 80 percent.
“Even knowing how important a healthy lifestyle is, we were surprised at how large a risk reduction there was for mortality,” says Haitham Ahmed, M.D., M.P.H., a cardiologist at Johns Hopkins and the lead author of the study, which was published in June in the American Journal of Epidemiology.

The researchers found that those who achieved the greatest benefit had these factors in common: They didn’t smoke, they maintained an optimal weight, they were physically active, and they followed a Mediterranean-style diet.

“There are a lot of things that determine your health,” Ahmed says. “Some you can’t control, but we found four things that you can control, and they produce tremendous benefits.”

The investigators were also able to show how and why. “We looked at the causal pathway,” says cardiologist Michael Blaha, M.D., M.P.H., a co-author. “We linked these factors to less early plaque in the arteries, less progression of plaque and thus fewer heart attacks, and consequently fewer deaths.”

These factors provide a template for creating the healthy lifestyle we want—and, thanks to this research, we now know we can achieve it.

Healthy people don’t smoke, plain and simple. The importance of this can’t be understated: Although the ideal formula for health is to adopt all four lifestyle factors, if you had to choose one, the researchers say, this is it.

“A smoker who eats well, exercises and maintains an ideal body weight will still be at greater risk than a nonsmoker who does none of the other three,” says senior author Roger Blumenthal, M.D., director of the Johns Hopkins Ciccarone Center for the Prevention of Heart Disease.

That’s not an argument against doing the other things—in fact, the more of these behaviors you adopt, the data suggest, the healthier you will be. It’s just a reminder as to how important smoking cessation is. “Smoking not only affects coronary arteries and lungs,” Ahmed says. “Smokers also have increased rates of cancer and risk of stroke. It just affects so many organ systems.”

The healthiest people in the study maintained a body mass index (BMI)—a ratio of height to weight that measures body fat—of less than 25. The best way to achieve that, of course, is to get busy on lifestyle changes 3 and 4.

“Healthy weight is generally a reflection of the cumulative effort in adherence to diet and exercise,” Blaha says. “It’s important because it integrates these effects over time, and we know that these healthy lifestyle traits exert their effect over a lifetime.” So while it’s laudable to hit your target weight or BMI in any given week, the real goal is to maintain that weight over the years.

To find out your BMI, Blumenthal recommends using a free online calculator. Any number between 18.5 and 24.9 is considered healthy.

Lifestyle change No. 3: Get up and move

You don’t need to run a marathon—or even around the block—to meet the minimum requirements for healthy exercise. In fact, many public health experts prefer to call it “physical activity” as a way to remind people that while they do need to move briskly for a sustained time, they don’t need to push themselves to chest-heaving, gasping-for-air levels of intensity.

The standards that researchers used are the widely followed U.S. Department of Health and Human Services’ guidelines for physical activity, which are 150 minutes of moderate-intensity activity per week or 75 minutes of more vigorous exercise per week.

The recommendation breaks down to about 30 minutes a day most days of the week. And those 30 minutes can be accumulated: You could break it into three 10-minute bouts of activity per day—a 10-minute walk in the morning, another at lunch and a stroll after dinner, if that suits your schedule.

How you gauge your activity is up to you. Blumenthal recommends a pedometer to track how many steps you take. A good rule of thumb is at least 5,000 steps per day with a target of more than 10,000 steps per day, most days of the week.

The study found that the healthiest people followed a Mediterranean-style diet. Blaha thinks he knows why. “The Mediterranean diet revolves around food choices,” he says. “It is a low-carb, healthy-fat, lean-protein diet, but that’s not how we describe it to patients. I tell them, ‘Eat like a Mediterranean.’”

That means a diet rich in fresh fruits and vegetables, tree nuts with healthy oils, fish (and less red meats), whole-grain carbs and olive oil for cooking.
“It’s the most palatable diet and most tasty, and patients tend to stick with it the most,” Blaha says.

Some of it is semantics, but most of it is simply that the Mediterranean diet sounds as good as it tastes. “When I tell my patients that a typical Mediterranean dinner might be salmon, couscous and some fresh veggies,” Blaha adds, “they say, ‘I’d pay twenty bucks for that meal!’”

Tips to Get You Started

“It might be overwhelming for someone to go out and do all of those four things right away,” says Michael T. Smith, Ph.D., director of the Johns Hopkins Center for Behavior and Health.

Change is definitely achievable, Smith says, if you start with these tips.

Make it matter. “You can’t make changes for other people’s reasons,” Smith says. “It has to be important for you.” Do you want to live to see your grandchildren graduate high school? Do you want to look and feel better?

Start small. “If you don’t believe that you can do it, you’re not likely to do it,” Smith says. So start where you think you might have the most success. Instead of exercising 30 minutes, five days a week, maybe it’s 10 minutes a day for three days. Maybe it’s just one day. “You always want to establish a realistic, behaviorally specific, short-term goal that is heavily weighted toward you being successful. Once you can achieve this easily, then incrementally increase your goal.”

Measure your momentum. “Have some way of objectively monitoring your progress that’s easy and works for you,” Smith says. This could be using a pedometer to track your steps, a logbook for your workouts or a food diary for what you eat.

Shout it from the rooftops. Tell your friends and family members that you’re setting out to make these changes in your life. The support you get is one reason for doing it. But more important, “you want to act in ways that are consistent with how you see yourself and project yourself to the world,” Smith says. “So if you tell people, you’ll have a much better chance of success.”

Anticipate problems—and solutions. Think about possible barriers to making this change and develop a plan to get around them. Case in point: When Smith first came to Johns Hopkins, he was overweight and decided it was finally time that he slimmed down. By keeping track of his eating, he realized he was consuming a lot of calories at night. His answer: “I started exercising later in the evening,” he says. “It was time I wasn’t in front of the TV eating.”

Give yourself 1 point for each of the four lifestyle habits that you have now: don’t smoke, maintain normal body weight, get up and move, make healthy food choices. Add them up and see how you’ve already affected your chances of living a longer life.

Video: Lifestyle Choices That Are Good for Your Heart