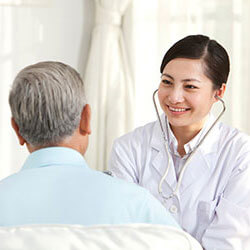 Although vascular malformations are a prevalent condition, they can be difficult to diagnose and tricky to treat.

Often mistaken for tumors, vascular malformations are actually masses that form in the lymph nodes, veins or arteries, usually composed of excess blood vessels. The masses can be severely painful and cause skin breakdown, disfigurement and loss of function. They occur before birth but may show symptoms at any age.

“We had a young woman from China who had a massive tongue malformation,” Mitchell says. “She could hardly speak or eat. But once we were able to shrink it down, she was able to return to a normal life again.”

Treatment options vary depending on the type and severity of the malformation. Arterial malformations may require a physician to go into the artery and plug the connections to the vein, possibly with medical-grade glue. Lymphatic and venous malformations, however, are generally treated with percutaneous (through-the-skin) therapy, perhaps a high-dose antibiotic that causes the mass to break down. “There is no skin cutting or scalpel,” says Clifford Weiss, M.D., an interventional radiologist at Johns Hopkins. “It’s the epitome of minimally invasive therapy and is extraordinarily effective.

“It’s very satisfying to treat these patients,” Weiss continues. “Vascular malformations are understudied, underfunded and underrecognized. Typically, our patients have gone undiagnosed or misdiagnosed for years and arrive at our clinic feeling scared and hopeless. We provide them with an accurate diagnosis, an understanding of their disease and a directed treatment plan.”

Although vascular malformations require expert care, first comes a diagnosis, which is no easy feat. “Some patients spend years trying to figure out what they have,” says interventional radiologist Sally Mitchell, M.D., “and then several more years looking for someone who can treat it.”

Mitchell launched the multidisciplinary Johns Hopkins Vascular Anomalies Center of Excellence to provide care for the many sufferers of vascular malformation. “Even the most well-trained interventional radiologists may see only one or two vascular anomalies per year,” says Clifford Weiss, M.D., who shares cases at the center with Mitchell. “At Johns Hopkins, we see 15 to 16 patients a week.”

The difficulty with vascular malformations is that they’re masters of disguise. Often mistaken for tumors or cysts, vascular anomalies can occur almost anywhere in the body. The good news: They are often treatable and are very responsive to nonsurgical treatment. During this video, Johns Hopkins physicians Sally Mitchell, M.D., and Clifford Weiss, M.D., discuss the different types of vascular malformations and available treatment options. To view the video, visit http://bit.ly/VIRWebinarVideo.