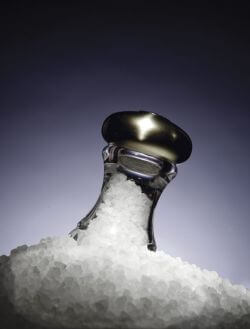 
Salt is all around us—even if you don’t live near the ocean or touch a saltshaker. That’s because our food is usually loaded with it right from the supermarket. And that, argues two leading Johns Hopkins physicians, is a big contributor to a public health crisis.

“It’s a huge problem,” says Lawrence Appel, M.D., director of Johns Hopkins’ Welch Center for Prevention, Epidemiology and Clinical Research. “As salt increases, so does blood pressure, and blood pressure is one of the leading causes of cardiovascular disease and stroke.”

The good news, says Gordon Tomaselli, M.D., chief of cardiology at Johns Hopkins and president of the American Heart Association (AHA), is that by being a bit more aware of our food choices, we can significantly reduce these diseases. “A number of studies show that just by reducing salt, we can lower blood pressure across the population enough to have a profound effect on lowering our risks,” he says.

How to Halt a Trend
Americans take in an average of about 2 teaspoons of salt a day from food, and about half of that—5,000 milligrams’ worth—is sodium, which is what causes all the trouble. “Because of that link between sodium and blood pressure, salt ends up having adverse consequences on the heart, brain and kidneys,” Tomaselli notes. For that reason, he says, the AHA urges people to keep sodium consumption under 1,500 milligrams a day, less than a third of the current average intake.
Contrary to what many people think, cutting salt usually isn’t simply a matter of saying no to the shaker at the dinner table.

“The real problem is that most of the food we buy already has a lot of salt in it,” Tomaselli says. “So while you do want to avoid adding a lot more at the table, the real goal is to find foods at the store that are low in salt to begin with.”

Become Label-Conscious
Because people are accustomed to heavily salted food, he notes, low-salt versions of the same foods can at first seem less tasty—and that’s why the food industry has been reluctant to cut back on the salt. But we get accustomed to foods with lower salt and begin to prefer them over the higher-salt versions, and the enormous health benefits of cutting down are more than enough reason to make the switch. “Once people start demanding lower-salt foods,” Tomaselli says, “the industry will respond.”

The first step in cutting down, he says, is to be aware of how much is in the food we buy. That means looking at labels to see how much sodium is in each item, while keeping the 1,500-milligrams-per-day limit in mind.

“If a single serving of food contains the entire amount of sodium you’re supposed to have in a day, you should try to make a better choice,” he says. Foods aren’t naturally salty, he adds. The salt is put in during processing at food plants, which means less-processed foods such as fresh fruits and vegetables are better choices than their frozen or canned cousins that often include high-sodium sauces.

Every Amount Counts
Those who downplay the health benefits of lowering salt intake, including researchers who in late 2011 suggested it could raise cholesterol and other heart disease risk factors, are a small minority of experts. Appel notes that evidence clearly links salt intake to elevated blood pressure and thus to disease risk.

“To casually say we don’t know that it’s true unless we do the big, controlled trials is to be extremely shortsighted,” he says. “Ninety percent of people will develop elevated blood pressure at some point, and it just doesn’t make sense to say that we should only try to lower salt for those people we know are most vulnerable.”

Besides improving health, he adds, achieving even small reductions in a person’s average blood pressure through lowered intake would lead to big cost savings in health care.

Tomaselli goes to great lengths to straighten out another possible source of confusion over lowering salt intake. The U.S. Food and Drug Administration recommends limiting daily sodium intake to 2,300 milligrams, nearly 50 percent higher than the AHA’s recommended maximum of 1,500 milligrams.

The Power to Drive Change
We have a long way to go to reach the AHA target. But Tomaselli says he thinks awareness of the health risks of high levels of sodium is growing.

“The AHA program and other programs to get the word out are beginning to get some traction,” he says. The real improvement will come when the food industry starts lowering the salt in processed foods in response to public demand for healthier options, he adds.

In the meantime, he says, the government, the AHA and other groups may need to keep up pressure on the food industry to cut down on salt now, to get a head start on lowering blood pressure and improving our health. “We need to work on both the food industry and the public to make this change happen,” he says. “The benefits will be enormous.”


The Salt-Stroke Connection
When it comes to the health benefits of lowering our salt intake, the one that often gets the most attention is the reduced risk of heart disease. Although that benefit is indeed enormous, especially given the prevalence of heart disease, the link between lowering salt intake and reducing the risk of stroke may be even stronger.

The payoff from averted stroke may also in some ways be even larger than that from averting heart disease. “Heart attacks are very serious and can have big consequences, but people frequently recover,” notes Lawrence Appel, M.D., director of Johns Hopkins’ Welch Center for Prevention, Epidemiology and Clinical Research. “On the other hand, the consequences of stroke can be huge, creating enormous disabilities that can last a lifetime.”

Even though there are more heart attacks than strokes in the U.S. each year, he adds, the costs added to the health system from strokes are likely higher because of the extensive long-term care that stroke patients usually require.

“Preventing just a few strokes can result in big savings,” Appel says, measured in reduced costs to the health system and in lives touched.


Can You Go Too Low with Salt?
Given the focus on reducing salt intake, should some of us worry about getting too little salt? In short, the answer is it’s almost certainly something most of us don’t have to be concerned about.

There are, in fact, highly unusual situations where your doctor may caution against overly restricting salt intake. Gordon Tomaselli, M.D., chief of cardiology at Johns Hopkins, notes that certain relatively rare forms of kidney or hormone-related disease may result in the body losing its ability to retain sodium, which means keeping intake of sodium up can be important.

In addition, people who suffer from fainting spells related to low blood pressure might benefit by not letting sodium intake drop too much. And certain rarely prescribed medications, including some corticosteroid replacement therapies, may result in sodium loss that calls for going easy on salt cutbacks.

But Tomaselli emphasizes that few people need to concern themselves with these unusual situations, assuming their doctors haven’t said something specifically about keeping sodium intake up. “The overwhelming majority of people would do well to reduce their salt intake,” Tomaselli says. “Eating the type of diet we do, it’s nearly impossible to take in too little.”

And he adds that, of course, the best way to deal with any questions or concerns about salt intake is to talk to your doctor.


Supermarket Savvy
Can you spot the hidden sodium in the foods that you buy every day at the grocery store? Discover which foods are best to eat, and which foods or aisles you should avoid. Join a Johns Hopkins dietitian for a grocery store tour at hopkinsmedicine.org/hidden_salt.


Free Seminar
Prevention of Cardiovascular Disease: What Should I Be Doing?
Tuesday, March 20, 2012, 7–8:30 p.m., in Towson
Join Gordon Tomaselli, M.D., Johns Hopkins chief of cardiology and president of the American Heart Association, as he discusses the important steps you can take to reduce your risk factors for heart disease—including how to make healthier choices and how to identify key warning signs. The presentation will be followed by a question-and-answer session. Refreshments will be served. Visit hopkinsmedicine.org/healthseminars to register.