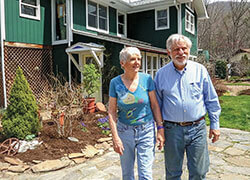 Ron Rolett with his wife, Karin

When my doctor found an abdominal aortic aneurysm during a routine screening, I knew it needed attention.

The aorta is the major vessel that supplies blood to the body. When an aneurysm causes that blood vessel to swell, it can grow large enough to rupture. That’s a life-threatening situation, and mine had grown past the danger threshold.

A physician friend suggested I consider seeking treatment at Johns Hopkins, and I’m extremely happy I did. Of the three options to repair my aneurysm, they said I was a candidate for two. One was open abdominal surgery. The other used a device called a fenestrated graft, which was recently approved by the U.S. Food and Drug Administration and was only available at a few centers in the country, including Johns Hopkins.

The fenestrated graft is inserted into an artery in the groin and passed through to the abdominal aorta. The flexible mesh tube has two or three windows that line up with the arteries in the kidney so my kidney can function during surgery. The recovery time for this minimally invasive procedure was about two weeks compared with six or eight weeks for open surgery.

I chose the new technique because of the recovery time. I also wanted to give my surgeon, James Black, M.D., the chance to perform the procedure for the first time with this new device. I had that kind of confidence in Dr. Black and his team and their experience with endovascular repair. From my perspective—both personal and medical—the fenestrated graft was the way to go.

Everything went smoothly, and after three days, I returned to my home in North Carolina. I didn’t have any limitations other than not lifting anything heavier than a gallon of milk.

At my first routine follow-up, Dr. Black was pleased with my progress. The graft is functioning beautifully and my kidney is stable. And I’m happy to be back to doing everything in life that I want to do.

Choosing the Right Treatment
Until recently, people with abdominal aortic aneurysms had two treatment options: open abdominal surgery and endovascular graft repair. The minimally invasive endovascular procedure is performed via blood vessels, but it is not an option for about 25 percent of people, including Ron Rolett, whose aneurysms are too close to the kidneys.

The difference between the tried-and-true endovascular repair and this new technique is the fenestrations (windows). Instead of blocking arteries with the graft’s metal skeleton and risking kidney failure, surgeons take detailed measurements of each person’s aorta and then precisely cut windows in the graft to line up with the openings of the arteries to allow blood to flow during surgery.