A common condition, chronic obstructive pulmonary disease affects more than 24 million Americans, yet many don’t even know they have it. COPD sufferer and spokeswoman Grace Anne Dorney Koppel wants to change that 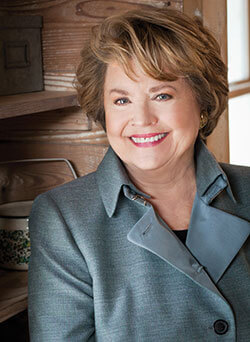 The shortness of breath came on as abruptly as a summer thunderstorm. One minute, attorney Grace Anne Dorney Koppel was walking down the street, legal briefcase in hand. The next minute, she was stopped, gasping to catch her breath.

Concerned by several of these frightening episodes, Dorney Koppel consulted her physician. He gave her a complete physical but ordered no spirometry test—which involves blowing into a tube attached to a machine to measure lung function—nor did he refer her to a pulmonologist for testing.

Dorney Koppel sensed there was more to the problem. Shortness of breath may sound innocuous, but not to those who have experienced it. “You don’t know if your next breath is coming at all,” she says.

Her husband, famed broadcast journalist Ted Koppel, also realized his wife’s difficulties were serious. “She couldn’t walk a hundred feet down the block without stopping,” he recalls. “I said, ‘This is crazy. We have to do something.’”

Dorney Koppel underwent a more thorough exam and received a grim diagnosis: She had chronic obstructive pulmonary disease—COPD for short, an umbrella term that describes lung diseases such as emphysema, chronic bronchitis and irreversible asthma. It was an affliction she had barely heard of.

“They said she had three to five years left to live,” Ted recalls. “We were told she needed to make ‘end-of-life preparations.’ I’ll never forget those words. That night, we lay in bed, hugged each other and cried.”

The crying soon stopped, and the work began.

‘There Is a Lot We Can Do’
The Koppels sought treatment at Johns Hopkins in 2002, where Robert Wise, M.D., a pulmonologist, gave Dorney Koppel a welcome reprieve from the earlier prognosis. “She was laboring under this notion that there was nothing that could be done,” Wise says. “The first thing was to emphasize that there is a lot we can do for patients with COPD. Although we wish we could do more, it’s not a hopeless disease.”

Especially when you have a determined patient. “I threw myself into the rehab,” Dorney Koppel recalls. She enrolled in a pulmonary rehabilitation program. She also began practicing what Wise calls “good respiratory hygiene.” She washes her hands frequently, gets a flu shot annually and, especially during flu season, tries to avoid large crowds. She takes her inhaled medications precisely as prescribed and gets regular lung checkups, which are down now to twice a year.

Soon, the woman who couldn’t make it down the block in 2001—and who arrived at Johns Hopkins in a wheelchair—was walking 2 to 3 miles a day on her treadmill, maintaining a brisk pace, quicker than 20 minutes per mile.

A Need for Knowledge
COPD is the country’s third deadliest disease—only heart disease and cancer take more American lives each year. Yet, Dorney Koppel says, “there’s a stigma about this disease, because everyone assumes that people who get it were doing something they shouldn’t have been doing.”

In Dorney Koppel’s case, smoking is probably the primary risk factor for her COPD. (It is important to note that 25 percent of COPD patients have never smoked a cigarette, and environment, occupation, genetics and secondhand smoke are also significant risk factors for developing COPD.)

Dorney Koppel quit smoking in 1992, nearly a decade before noticing the first signs of COPD (see “The ABCs of COPD”), but the seemingly sudden onset actually was the acute stage of a condition that takes years to progress. The disease has no symptoms early on, and millions suffer in silence until it gets to a point that it cannot be ignored. Sufferers mistakenly think they are just aging, slowing down or getting out of shape.

COPD claims the lives of 135,000 Americans annually. One person dies of COPD every four minutes, 365 days a year. That number is probably a low estimate, Dorney Koppel says, because COPD may be listed as a contributing cause of death when it is often the primary cause.

More than 24 million Americans are believed to have COPD, but only half have been diagnosed and are getting treatment. Typically, when diagnosed, sufferers have already lost 50 percent or more of their breathing ability. “If treated,” Dorney Koppel says, “COPD progresses more slowly, quality of life improves and, in some cases, survival is increased.”

People who have symptoms—especially if they are older than 40 and are current or former smokers—should consult their physicians and ask for a spirometry test.

“Spirometry can be done easily and inexpensively,” Wise says, “and should be part of any routine medical test.”

Full-Time Advocate
Today, from the comfort of her home in Potomac, Md., Dorney Koppel has made COPD awareness a full-time pursuit. She is now a national patient advocate for the National Heart, Lung, and Blood Institute’s campaign to raise awareness of COPD.

“It’s my second career,” she says, one she felt compelled to take on after Wise recommended her. She continues to learn more about COPD and people’s misperceptions about the disease.

The story of her initial misdiagnosis typifies the experience of many people who suffer from COPD. “The failure to diagnose the disease early on, the failure to give hope and optimism,” Wise says. “Sadly, that’s all too true.”

That is especially the case with women older than 55, an increasingly large part of the COPD population. And yet, says Enid Neptune, M.D., a pulmonologist at Johns Hopkins who is researching this issue, women have been underrepresented in the research. Traditionally, COPD has been considered a “male” disease; men tend to be heavier smokers than women and work in environments more conducive to lung disease.

“Until recently, the impact of the disease on women has not been a pressing question in COPD research,” Neptune says. “No one thought that women were as susceptible as men.”

Dorney Koppel talks passionately about the need for greater awareness and treatment of COPD. The priorities in her life are well reflected in the objects around her home office. A sign that says “If Mother Says No, Ask Grandmother” adorns the wall (the Koppels have seven grandchildren), near an appreciation award from the American Thoracic Society. Medical journals stacked next to framed family photos.

She has shown how a determined woman can improve her health. Now she’s showing how a determined woman can make a difference in public health. Dorney Koppel sits on several boards and committees, including the COPD Foundation board, attends medical conventions and events such as Johns Hopkins’ annual women’s health conference, A Woman’s Journey (she was the keynote speaker in 2012), and travels the country, speaking about the need for greater awareness and proper diagnosis and treatment of COPD.

“She’s a force to be reckoned with,” Neptune says.

“I’m enormously proud of what Grace Anne has done,” says Ted, who, along with his wife, established The Dorney Koppel Family Charitable Foundation Inc. to help establish pulmonary rehabilitation centers in areas that have none. “I can’t think of a better way to see her talents used than in the fight against this terrible disease.”

The ABCs of COPD
Although traditionally thought of as a condition affecting men, chronic obstructive pulmonary disease (COPD) now causes more deaths in women than men. “This is really becoming a disease of older women,” says Enid Neptune, M.D., a pulmonologist at Johns Hopkins. Neptune points to recent research showing that women smokers may be 25 percent more susceptible to the disease than men.

Symptoms of the disease include breathlessness and chronic coughing and wheezing. But, cautions Robert Wise, M.D., a pulmonologist at Johns Hopkins, “it’s hard to diagnose COPD from symptoms alone. There’s a very long period where it is asymptomatic.”

Though damage to lungs from COPD is irreversible, progress of the disease can be halted. Quitting smoking, Wise says, is the single most important step. And although medication can help, exercise is the second most important tool in the fight against COPD, as it strengthens the cardiovascular system, which helps improve the ability and efficiency with which the body uses oxygen.

“Exercise is more effective than any medication we have,” Wise says. “It improves people’s quality of life.”

Seminar: COPD: A Talk That Won’t Leave You Breathless
Saturday, November 16, in Baltimore

Learn more about chronic obstructive pulmonary disease (COPD), a condition that is increasing among women, at Johns Hopkins Medicine’s award-winning annual women’s health conference, A Woman’s Journey. Join pulmonologist Enid Neptune, M.D., as she describes COPD risk factors, symptoms and treatments that may someday cure this disease. For more information about a conference near you, call 410-955-8660 or visit hopkinsmedicine.org/awomansjourney.