Treatments are available for even the most severe peripheral arterial disease 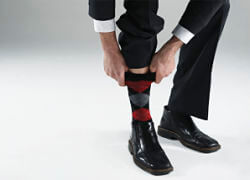 It’s no secret that clogged arteries can wreak havoc on your heart. But what you might call poor circulation actually may be a potentially dangerous blockage of large arteries in the legs. This peripheral arterial disease (PAD) is caused by the same kind of fatty deposits or plaque that can build up in the coronary arteries leading to the heart.

Although the disease is often linked to diabetes, the truth is we’re all prone to PAD as we age, says Mark Lessne, M.D., a Johns Hopkins interventional radiologist, with one in five people older than 65 suffering from the condition.

For people with moderate to severe PAD who may need revascularization (rerouting of blood vessels) to restore blood flow to their legs, the good news is Johns Hopkins features an expert multidisciplinary team with interventional radiologists, podiatrists and surgeons all working together to determine a person’s treatment options, including interventional radiology and vascular surgery.

Interventional radiology is minimally invasive, requiring a needle-sized incision, Lessne says. During the procedure, the doctor passes a catheter into the blocked artery, inflating a tiny balloon to open the blockage and positioning a tiny metal stent to keep the artery open. “Most often, there’s a shorter recovery time and fewer complications,” Lessne says, adding that there is a trade-off. Depending on where the disease is, the effects of interventional radiology may not last as long as vascular surgery.

In some cases, vascular bypass surgery is an alternative. Thomas Reifsnyder, M.D., chief of Johns Hopkins Bayview’s Division of Vascular Surgery, is an expert in using a segment of a person’s vein to bypass the troublesome blockage.

People who have the most advanced stage of PAD, known as critical limb ischemia, face nonhealing ulcers and gangrene, prompting some physicians to recommend amputation. Reifsnyder emphasizes the importance of getting a second opinion from Johns Hopkins.

“I frequently get phone calls from physicians and family members of patients telling me their loved ones are going to require an amputation,” he says. “When I see those patients as a second opinion, frequently the repair or surgery to save that limb is easily done and is something that can absolutely change a patient’s life.”

When Achy Legs Are a Warning
The classic symptoms of peripheral arterial disease (PAD) are cramplike leg muscle fatigue or heaviness, and discomfort or pain that occurs in the buttocks, thigh or calf muscles while walking or climbing stairs. The pain typically ceases five to 10 minutes after you rest or stop the activity. Also be on the lookout for symptoms such as numbness, tingling and weakness.