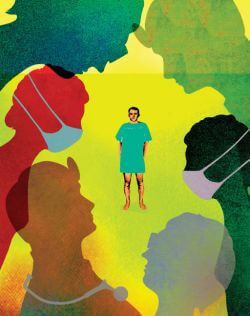 In 1988, he underwent a multivessel open-heart bypass procedure. When those bypasses started giving out 20 years later, as is often the case, he was hospitalized twice, emerging with two stents to help restore the lost blood flow to his heart.

But, to Howe’s dismay, he found that he still couldn’t walk across a room without gasping for breath, and physicians near his home said they were running out of options.

For Howe, an avid tennis player who’d placed third in his U.S. age group just before his bypasses began to fail, and a career diplomat who’d rarely slowed his pace, the situation was unacceptable.

Howe’s biggest challenge, however, wasn’t not knowing what to do next; it was getting someone to do it. Even with his otherwise good health, one thing held his physicians back from taking the next logical step:

His doctors at the time thought it was obvious that he couldn’t undergo a heart operation. Instead, they advised him to just settle for a shorter life.

When Cameron looked at Howe’s dangerously narrowed aortic valve, he also took in the remarkable character of an individual with an uncommon zeal for life.

“I think you’ve got the stuff to do it,” Cameron said.

Cameron performed the operation, and today Howe is back to exercising daily on the rower, treadmill and elliptical.

It’s an outlook that has been ingrained from the get-go, when Johns Hopkins’ first surgeon-in-chief, William Halsted, M.D., laid the foundation for surgery in the U.S. as we know it.

Halsted not only revolutionized surgery by insisting on skill and technique, but he also pioneered the first lifesaving surgical treatment for breast cancer. He developed new operations for intestinal and stomach surgeries, gallstone removal, hernia repair and disorders of the thyroid gland.

Those following in Halsted’s footsteps at Johns Hopkins launched the specialty of neurosurgery, proved that operating on the heart was even possible, became the first to separate twins joined at the head and implanted the first defibrillator in a human heart.
The list rolls on. At Johns Hopkins, the word can’t is replaced by let’s see about that.

Redefining Eligibility
Howe may not be the most typical of Cameron’s heart-surgery patients, but he certainly proves that cases shouldn’t be judged by a rule book.

“As our population ages,” Cameron says, “we’re seeing more patients with problems like age-related aortic stenosis that require surgery.” Many of those patients who are being rejected elsewhere because of age are reconsidered at Johns Hopkins.

And it’s not just for heart surgery.

When thoracic surgeon Stephen Yang, M.D., came to Johns Hopkins 13 years ago, he took it as an article of faith that patients older than 65 made poor candidates for surgery. Now, a rising tide of seniors considered to be ineligible for surgery somewhere else are finding their way to Yang’s office-and getting very different answers.

“More people are staying healthier longer, and many are defying their biological age,” Yang says. “We consider patients on their merits.”

Improving Quality of Life
The age barrier can work the other way, too. While many surgeons shy away from the complexities of surgery for people who are past a certain age, others won’t operate until you reach a certain age.

Orthopedic surgeon Simon Mears, M.D., sees it a lot. With joint replacements, he explains, surgeons worry about components wearing down and patients having to face other operations down the road.

“The younger the patient, the more likely that is to be the thinking,” he says.

But today’s artificial joints have improved significantly, he adds. Even more important, there’s a quality-of-life issue that’s hard to ignore.

Take one of Mears’ patients, a 29-year-old who needed both hips replaced. Other surgeons would have her wait 10 to 15 years for the surgery. “Meanwhile,” Mears says, “her only alternative was to be in a wheelchair or to be virtually immobile.” Mears did the double hip replacement, and his patient is now back on her feet.

“People want to remain active,” he says. “When they’re otherwise healthy, more often than not we can do the procedure.”

Not Settling for No
Age-at either end of the spectrum-is far from the only limit that Johns Hopkins surgeons regularly question. Sometimes, they say, solving a surgical problem means refusing to accept that the standard approach equals the best approach. It’s a mantra that Colorado radiologist Michael Fox came to appreciate after his hometown doctors found a benign lesion on his pancreas.

Fox was continually told that the only way to deal with the growth was to have an operation called the Whipple procedure.

But the Whipple, ordinarily used for people who have pancreatic cancer, removes part of the pancreas as well as the gallbladder, the common bile duct and part of the small intestine. To Fox, that seemed like overkill.

By doing a little research on his own, Fox discovered that Johns Hopkins pancreatic surgeon Dana Andersen, M.D., had developed a technique for these kinds of noncancerous lesions that leaves most of the pancreas intact and doesn’t affect the other organs.

“Why go for the most aggressive if you don’t have to?” Fox says. “Often there’s another path. People need to know that.”

Let’s Go to the Replay
There was a time when surgically curing a man of prostate cancer also guaranteed that he’d be impotent. Then, 28 years ago, Johns Hopkins urologist Patrick Walsh, M.D., developed a way to remove a cancerous prostate but spare as much as possible the bundles of delicate nerves on either side that are responsible for erection.

Today, that operation is considered the gold-standard treatment for cancer confined to the prostate.

Yet Walsh never rested on laurels. To figure out why one man he operated on would have a perfect result immediately while another one’s result might be delayed, Walsh began videotaping his operations, then spent hours scrutinizing them.

Among his discoveries was that some men have a slight variation in the location of those all-important nerve bundles. As a result, he says, “if you don’t realize it, you could go where you think everything is safe, and it really isn’t.”

When Walsh first started using the video camera, some of his patients asked if he was afraid of being sued. “My answer was no,” he says. “It wasn’t that I did something wrong; it was that sometimes I did something better. And I wanted to know what that was. On the videotape, you can see the entire field, the secondary consequences in what your fingertips may be doing, things you never saw before. It really was a revelation.”

The Future of Breast Reconstruction
Breast reconstruction surgeon Gedge Rosson, M.D., knows well that the first priority of a woman diagnosed with breast cancer is: Save my life.

He’s an expert at meeting her second priority: Restore my bust line.

And now he’s working toward a third priority that few women have dared to even hope for: Preserve my physical sensation.

So far, through artful nerve-sparing and attachment, Rosson has helped many women retain a feeling of some physical contact on the surface of their reconstructed breasts, an achievement unheard of only a few years ago.

But the real goal-the one that Rosson hopes to advance with new research-is to be able to preserve erogenous sensation.

“That is still on the horizon,” Rosson says. “But we’re pushing on that boundary.”
Watch a YouTube video featuring Johns Hopkins breast cancer expert Lillie Shockney, R.N., in “Know Your Options for Breast Reconstruction.” Visit hopkinsmedicine.org/breastcenter. To make an appointment, call 877-546-1872.

Tiny Hearts Get Another Chance
Until recently, a physician faced double jeopardy treating an infant in need of a heart transplant. There were risks associated with the procedure itself, plus a 40 percent chance the baby wouldn’t survive the wait for a compatible donor heart.

Today, those odds are much improved, says pediatric heart surgeon Luca Vricella, M.D. Vricella has shown that infants up to 14 months old can accept a donor heart of a different blood type without an increased risk of rejection.

“It still requires special precautions,” Vricella explains. “But this means we can reduce by up to 20 percent the number of children who die waiting for a matching donor heart.”

Watch and listen to more surgery success stories from physicians and patients. Plus, get the latest videos, podcasts and medical news. Subscribe to our online communities:  Facebook.com (search Johns Hopkins Medicine) and YouTube.com/johnshopkinsmedicine.