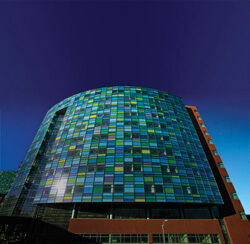 The new Johns Hopkins building gets the Monet treatment, using the master’s palette for innovations in light, color and nature to create a calming, healing environment for patients

If the facade of Johns Hopkins’ newly opened patient care building seems unusually warm and vibrant, give some of the credit to Claude Monet. The colors found in the windows were based on the celebrated painter’s works, and in particular his Water Lilies series. Suffused with subtleties of light and hue, the windows are designed to instill a feeling of calm.

It’s not unusual, of course, to come across art in a hospital, where lovely images can provide a modest but much-needed lift. But in this case, the art also serves another role: It is, in a sense, a pointer to the hospital’s hugely ambitious design—a design intended to turn an entire hospital into a work of light, color, nature and healing, even as it houses the world’s most advanced medical science and patient care.

As Allen Kolkowitz, the consulting architect for the Johns Hopkins project, puts it, it’s a building complex that tells a story. “The design is a shared narrative that comes from the many dynamic voices in Johns Hopkins,” he says.“And that includes the most important voices of all: the voices of the patients.”

Every component of the hospital’s artwork and the building’s interior look and feel reflect comments the designers directly solicited from Johns Hopkins staff and administration, as well as from patients and their families.

The story starts as you approach the building, which opened May 1. There, lined at ground level with a series of gardens, the Sheikh Zayed Tower and The Charlotte R. Bloomberg Children’s Center reveal themselves as graceful shapes wrapped in a mosaic of blues and greens. That mosaic is composed of colored metal panels in 26 shades of blue, green and yellow that are placed in a “shadow box” fashion behind the building glass, which has a custom ceramic frit pattern to evoke the feeling of light reflecting on water. The concept for the color palette and the frit is the brainchild of artist Spencer Finch. Finch started by carefully examining some of Monet’s famous Water Lilies paintings, shimmering with the interplay of color, light, flora and water.

Bringing the beauty of nature into the design required hard-core engineering, notes Nancy Rosen, the art curator who worked with a Johns Hopkins committee to select art for the new building. Finch and the design team built a small observation lab on the roof of the hospital’s garage during construction to observe how the panels looked at various times of the day, at night, from inside and from outside, from a variety of angles, and in different weather. And a structural mock-up of a section of the building’s brick, glass and paneled exterior, constructed in Florida as part of a process to test the building’s construction under extreme conditions of rain and heat, enabled Finch and the design team to better understand the application of colors and fritted glass at full scale.

“We wanted to make sure the panels behaved well in the face of all sorts of environmental conditions,” Rosen says.

If you are dropped off at the hospital or walk to it, you end up at a single gathering of four separate entrances—for adult care, emergency care, pediatric care and pediatric emergency care—protected under a single, continuous canopy. Besides offering shelter from the weather, the single canopy is also intended to organize a very complex building.

“When you arrive at an institution of this scale,” Kolkowitz explains, “it helps to have a single-element design that removes you from that scale and provides a level of comfort and familiarity.”

The arrival area offers special design considerations to those at the pediatric entrances. Immediately notable among them is a very large, colorful rhinoceros with a smaller rhino perched on its back, both placed on a bed of large, raised chunks of pavement. Not far away, a large, suspended ostrich surveys the scene inside a four-story glass atrium. All these grand-but-friendly figures were sculpted to have the look of giant toys assembled from building blocks.

The array of colored, opaque panels on the Wolfe Street side of the pediatric emergency department displays all 26 colors that Finch, inspired by Monet, applied to the building’s exterior, but here they are all at eye level, the place where the observer can engage the interaction of the frit and the color panels up close. And once inside the emergency treatment rooms, patients will find an unusual window shade, offering privacy and a little delight. “Children admitted to emergency care tend to be scared and stressed,” Rosen notes. “The design can give them something that feels more homey and playful.”

For those who park in the garage across Orleans Street, the entrance is via one of two large pedestrian bridges, one to the Zayed Tower and the other to the Bloomberg Children’s Center. The colorful facade is visible from the bridges, with the floors of the bridges providing the first sense of how color is used in the hospital to convey information—namely, green associated with adult care, and blue with pediatric care. The color theme is echoed in the signage and elevator lobbies throughout the hospital.

Appreciation at Every Station

Those entering the Zayed Tower also find themselves swathed in carefully thought-out design elements. Coming in over the pedestrian bridge from the garage immediately leads to a welcome desk topped with glass that covers artwork in a dogwood block pattern, the first of many nature-themed works created by local and national artists that fill the lobby and main public areas.

The information desks at the ground-level and bridge entrances are crowned with large, sculpted vessels—one representing a beautiful floral bouquet, the other a vibrant, mossy version of the “scholar’s rock” of Chinese legend, together suggesting the fusion of scientific knowledge and life that is at the heart of medicine. The tops of each of the four welcome desks, too, are graced with artworks.

“Even if you just stop to put your bag down or ask a question, you’ll have a chance to appreciate art and nature,” Rosen says. The nature theme is further extended through a lush, expansive garden attached to the lobby.

The designers could hardly have ignored what Rosen calls “the other intense experience of hospitals”: the 560 all-private patient rooms, which presented their own unique challenge. “There’s so much equipment and fixtures in patient rooms, any paintings or posters we stuck on the walls would have been lost in the jumble,” Rosen notes.

The solution: turn the window shades into unique, stimulating works of art and information, framed by the huge windows themselves. Each shade, which is typically 5 feet by 7 feet, is decorated with any of a number of tableaus with mostly Baltimore-oriented themes—maps, local attractions, trees or scenes around Johns Hopkins.

Most of the pictures are composed of details and words intended to provide not only a stimulating, comforting image, but also a means of pleasant distraction for those who want to plumb the specifics. For example, more than 20 languages are represented in some of the window-shade designs, offering a linguistic lesson to the native English speaker and comforting familiarity to others.

Everyone will interact with the groundbreaking design gestures of the new building in a different way. But when the first early visitors crossed the pedestrian bridges, after 10 years of work and five years of active construction, Kolkowitz stood to the side to watch for reactions.

“People were stopping in the middle of the bridge and marveling at what they saw ahead of them,” he recalls. “At that moment I felt we may have actually succeeded in providing a design that would not only reaffirm the long-standing clinical mission of Johns Hopkins, but also provide a connection to the architecture that would be part of the voice of caring.”

The calming, healing environment of Johns Hopkins’ new building isn’t just a matter of what the designers put in; it’s what they took out.

Patients and visitors may not consciously notice, but at some level will likely appreciate, that public spaces and corridors are unusually quiet. That’s because, for starters, caregivers and other staff in the hospital are summoned not by a public-paging system, but personal mobile devices.

What’s more, voices are hushed throughout by state-of-the-art acoustical tiles in the ceiling as well as by panels swathed in special sound-absorbing fabrics. And in the case of the neonatal intensive care unit, where quiet is critical, rubber floors swallow the sounds of footsteps.

Whether entering The Charlotte R. Bloomberg Children’s Center from the front arrival area or the pedestrian bridge connected to the parking garage, you’re immediately exposed to a large, colorful, mostly open space that draws the eyes to a series of oversized animal sculptures. A 22-foot-tall ostrich is suspended in the air, and below it is an ostrich egg perched on the reception desk. Also hanging is a ring of moons representing the 28 moon phases, complete with a winged cow leaping over them. A family of puffer fish floats in another area. The furniture is equally playful, composed of loop-the-loops and bright colors.

If you feel as if you wandered onto some sort of entertainment-oriented set, it’s no coincidence. The design team brought in famed opera-set and costume designer Robert Israel to come up with the sculptures. “He’s accustomed to working on the stage, where people are walking around and engaged in activities,” says Nancy Rosen, the art curator who worked with a Johns Hopkins committee to select art for the new building. “We didn’t want the space to look like a museum.”

Israel’s playful take on animals also carries with it subliminally comforting messages, Rosen adds. The building-block sculpture composition recalls the elemental forms we first perceive as infants. And that the animals are mostly portrayed in different sizes and in pairs or groups was inspired by a conversation with George Dover, M.D., director of Johns Hopkins Children’s Center, who told Israel that children more easily connect to characters when they imply family.

Along with the set like pieces, the Children’s Center offers a number of delightfully unhospital like spaces where children and families can relax or have some fun, including a two-story indoor play area with a basketball court, and reading nooks. After all, for a child, playing and imagining can be medicine, too.