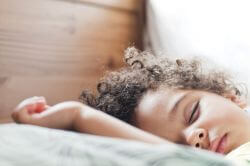 Put concerns to rest for children who have a surprising disease: sleep apnea

It’s no secret that children need plenty of rest. But what you may not know is a sneaky sleep thief could be absconding with their health and social development.

Although parents usually think of sleep apnea as an adult disorder, it can strike at a young age. For a condition known as pediatric obstructive sleep apnea, “the prime time is between ages 2 and 6, but I’ve seen it in newborns and teenagers,” says Stacey Ishman, M.D., an otolaryngologist (ear, nose and throat doctor) at Johns Hopkins.

When sleep apnea robs kids of a healthy amount of shut-eye, they’re not only tired, but they also can become irritable, hyperactive or aggressive. Worn-out kids have a tougher time remembering facts and focusing in school.

“Studies actually show that up to 50 percent of kids with ADHD [attention deficit hyperactivity disorder] have sleep-disordered breathing or sleep apnea,” Ishman says. If left untreated, sleep apnea can undermine your child’s health in surprising ways, from putting the kibosh on growth hormone, which is secreted mostly at night, to putting your child at greater risk for heart disease later in life.

Do you notice loud snores coming from your baby monitor or child’s bedroom? There is reason to suspect sleep apnea.

“The most common symptom is snoring that usually happens regularly and is often loud enough to hear through a closed door,” Ishman says. She advises parents to listen for pauses in their child’s breathing, which may sound like gasps or snorts, during REM sleep, typically between 1 and 6 a.m.

For the only definitive diagnosis, children need overnight sleep studies.


Days in a Daze
Remember the exhaustion of caring for a wakeful newborn? That’s the same tiredness suffered by the estimated 2 to 4 percent of American kids who have sleep apnea, says Stacey Ishman, M.D., an otolaryngologist at Johns Hopkins. Symptoms include:

For more information, appointments or consultations, call 877-546-1872 or visit hopkinsmedicine.org/otolaryngology.