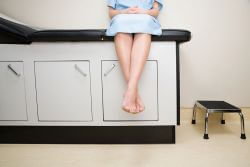 It’s not “all in your head.” Beware of these five conditions that cause hard-to-diagnose pain for women

Domica Martin, a forty-year-old mother of three from Fairfax, Va., knew something was wrong. A dull and aching pain in her lower abdomen lurked throughout the day as she cleaned the house, cared for her children and trained for her next marathon. At first, she chalked it up to a pulled muscle.

Little did she know, but Martin was about to embark on a medical mystery tour—a journey from physician to physician as she sought relief from chronic pelvic pain, which strikes an estimated one-third of all women at some point in their lives. The condition can be tricky to diagnose, and many of its sufferers are told the problem is “all in their heads,” according to the Society of Interventional Radiology.

“A typical patient I treat is a woman who has gone from physician to physician looking for solutions as she suffers a long, long time,” says Kelvin Hong, M.D., a Johns Hopkins interventional radiologist specializing in pelvic congestion syndrome.

Pelvic congestion syndrome is one of several conditions that leave women with pain that is hard to explain—and diagnose. Here is your guide to five women’s ailments that can be dismissed too easily.

Pelvic Congestion Syndrome
Symptoms: A dull and aching pain that lingers in your lower abdomen and lower back.

“There also can be a burning sensation or feeling of fullness in the pelvis that worsens with standing and gets progressively worse throughout the day,” Hong says. “The feeling improves when a woman lies down or gets off her feet.” For many women, the pain worsens after intercourse and during menstrual periods or pregnancy.

The culprit: Like varicose veins in the legs, valves in the veins of the pelvis become weakened and don’t close properly. Instead of defying gravity and returning blood to the heart, the valves allow blood to flow backward and pool in the veins, causing pressure and bulging.

Mistaken identities: Premenstrual syndrome, perimenopause, stress or an occupational problem caused by standing too long. It even hides during diagnostic tests. Once a woman lies down for a pelvic exam or ultrasound, the change of posture relieves pressure on the ovarian veins, which no longer bulge with blood as they do when she stands.

How it’s treated: Interventional radiologists like Hong perform an outpatient procedure called embolization while patients are lightly sedated. During the procedure, the radiologist inserts a thin catheter that’s about the size of a strand of spaghetti into the groin’s femoral vein and moves it to the affected vein using X-ray guidance.

“We essentially obliterate abnormal veins,” Hong says, “which forces the blood back via veins that have normally functioning valves.”

Patients can return to normal activities immediately after treatment. Depending on the severity of the symptoms, other treatment options include prescription pain relievers; hormones, such as birth control pills; and surgical options, including a hysterectomy with removal of ovaries, and tying off or removing veins.

Sphincter of Oddi Dysfunction
Symptoms: It’s like a bad case of déjà vu. After surgery to remove an ailing gallbladder, the same pain strikes again: persistent or recurrent discomfort in the upper right or middle part of the abdomen that radiates around to the back.

The culprit: A small muscle at the end of the bile duct becomes dysfunctional.

“I’ve seen women who once were told it was because of stress or problems with their marriage,” Kalloo says. “Some were even seen by psychiatrists because they thought the pain was all in their heads. These women had their gallbladder out, so their problem should have been solved.”

Ovarian Cancer
Symptoms: Bloating or swelling of the abdomen, pelvic pressure or stomach pain, trouble eating or feeling full quickly, and having to urinate often or feeling as if you have to go right away.

The culprit: Cancer that begins in the ovaries and reproductive glands.

How it’s treated: Options include surgery, chemotherapy and radiation therapy; two or even all of these therapies might be prescribed at some point during treatment. The most important factors in outcome are early diagnosis and successful removal of disease during surgery.

Vulvodynia
Symptoms: Pain and burning, stinging or rawness in the vulva make a woman’s life miserable.

“The pain and burning are often worse with contact to the area, so even sitting, wiping and being intimate can be painful,” says Johns Hopkins physical therapist Laura Scheufele. “In extreme cases, I’ve seen women who couldn’t work or whose marriages broke up because of the condition.”

The culprit: Its exact cause remains unknown, but experts have ruled out active infections and sexually transmitted diseases.

How it’s treated: Drug therapy to block pain signals, and occasionally nerve blocks. For women who have pelvic floor muscle spasms or weakness, physical therapy and biofeedback can be helpful, Scheufele says.

Interstitial Cystitis, or IC, also known as painful bladder syndrome
Symptoms: Nagging pelvic pain, pressure or discomfort in the bladder and pelvic region, along with a need to urinate often and with a feeling of urgency.

The culprit: The exact cause remains a mystery.

How it’s treated: A combination of medication, physical therapy and eliminating trigger foods in the diet.

Normal Again
For almost two years, chronic pelvic pain put a damper on Domica Martin’s zest for life, yet she never gave up hope. At last, through her own Internet sleuthing, she made a discovery that would finally solve her medical mystery. Search results kept pointing her to new research by Johns Hopkins. She made an appointment with Kelvin Hong, who quickly diagnosed her condition—pelvic congestion syndrome—and provided successful treatment.

“Life is normal again,” Martin says with relief. And as she trains for her next big race, she knows feeling normal is something no one should take for granted.


Get the Most from Your Specialist Visit
Forging a successful partnership with a physician takes time. What can you do to make the most of your all-important first visit to a medical specialist? Here is a handy checklist of what to bring:

Second Opinions Made Simple
It’s easy to feel overwhelmed if you’re faced with a frightening diagnosis or must choose from a variety of confusing treatment options. Seeking a second opinion can help. But what if you live far away, can’t travel or have problems with mobility? The good news is, you can get a remote second opinion from the experts at Johns Hopkins Medicine. Specialists in the fields of otolaryngology, gastroenterology, hepatology, neurology, neurosurgery, urology, pathology, gynecology and urogynecology can work with you to provide recommendations about your treatment plan or options. To find out more, visit hopkinsmedicine.org/second_opinion.


9 Symptoms Women Should Never Ignore
1. Bloating or swelling of your abdomen
2. Pelvic pressure or stomach pain
3. Trouble eating or feeling full quickly
4. Having to urinate often or feeling a sense of urgency that you have to go right away
5. Persistent or recurrent pain after gallbladder surgery
6. Chronic pain in the lower abdomen and lower back that increases after intercourse, during menstrual periods, when tired or standing, and during pregnancy
7. Abnormal menstrual bleeding
8. Pain and burning of the vulva
9. Recurring pain, pressure or discomfort in the bladder and pelvic region


Johns Hopkins Is Ranked No. 1 in Gynecology by U.S.News & World Report
For more information, visit hopkinsmedicine.org/womenshealth. For appointments and consultations, call 877-546-1872.