Johns Hopkins Health - Is It Perimenopause? 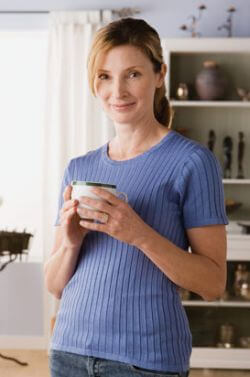 Mood swings, lack of concentration, expanding waistline and trouble sleeping? If you’re between your late 30s and late 40s, you may be thinking you’re going crazy. Chances are better you’re in perimenopause. But what—if anything—should you do about it?

What is perimenopause?
Years before menopause, women go through a transitional period called perimenopause. Biologically speaking, perimenopause begins when estrogen and progesterone levels start to fluctuate less predictably, says Johns Hopkins reproductive endocrinologist Howard Zacur, M.D. That can happen for a woman anywhere between her late 30s and late 40s—even sometimes earlier or later. What’s especially telltale are irregular periods. That’s different from menopause, which usually occurs around age 50 or when, barring pregnancy, a woman has not had her period for one year.

How do you know for sure if you’re in perimenopause?
In addition to irregular periods, many women will have symptoms such as night sweats, hot flashes, mood swings and memory problems, decreased libidos, and body and skin changes—expanding waistlines and drier skin, for example. Hormone testing may help to know for sure. If certain hormone levels are elevated, in addition to skipped periods and hot flashes, that’s suggestive for perimenopause.

What should I do?
For some women, perimenopause symptoms may be subtle or not terribly bothersome. If that’s the case, you don’t need to do anything—except be aware that it is still possible to become pregnant. For other women whose symptoms are more severe, options may include a low-dose birth control regimen or hormone replacement therapy (HRT). Other things such as healthy eating and exercise can have a significant impact on the symptoms of perimenopause.

What if I don’t want HRT or contraceptives?
First, it’s important to know that HRT and low-dose birth control are safe and effective for the symptoms of perimenopause. In some cases, physicians treat these symptoms with antidepressants. But antidepressants accelerate bone loss, which is an issue for all women but especially for women who are in perimenopause or menopause. Women also may choose so-called natural remedies. Many of these remedies contain estrogen. Although we know that estrogen levels are declining in perimenopausal women, we don’t necessarily know that this is the cause of the symptoms, nor have we determined what levels are considered safe. The key when choosing one therapy over another is to be informed.