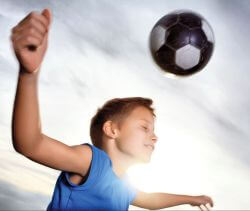 About 300,000 student-athletes sustain concussions each year. Getting kids back in the game safely means paying attention and taking it slowly if there’s a problem

As parents, it’s sometimes hard to watch our kids get battered  around on the ball field. Most of the knocks, fortunately, result only in minor scrapes or bruises.

Protecting Young Minds
“We as medical professionals tend to pay more attention to the high school and college-level athletes,” Jallo says. “But we’re overlooking the younger kids, who are just as susceptible to this kind of injury.”

And they are perhaps even more vulnerable than older children, Jallo suggests. High school and college sports coaches and athletic directors usually have guidelines for concussions. Coaches for rec council activities usually do not, and may not even know or pay attention to concussion warning signs.

That lack of awareness and knowledge might lead to what neurologists and neurosurgeons call second-impact syndrome, when a child is sent back into practice or a game after suffering a concussion and receives another blow.

One After the Other
“Cumulative effects of multiple concussions can be devastating,” Jallo says. He warns that the symptoms of concussion aren’t often easy to identify. In fact, although most people think of loss of consciousness as the direct result of a concussion, other symptoms such as confusion, irritability and dizziness are much more common. To complicate it further, those symptoms might not happen immediately but may take several minutes, hours or even days to show.

That means parents need to watch their young athletes closely, making sure they wear proper safety gear and keeping them off the field when there are symptoms of a concussion.

“You really want to err on the side of caution when it comes to the possibility of a mild traumatic brain injury,” Jallo says.


Signs and Symptoms
Ask your child’s coaches how they assess injuries to the head, and watch out for these red flags of concussion:

If your child experiences any of these symptoms, he or she should not return to the sport until seen and evaluated by a physician. Also, in the case of severe and persistent vomiting following a concussion, your child should be taken immediately to an emergency room.