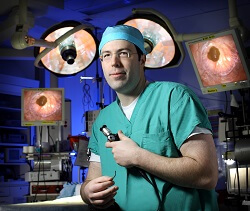 In 2012, Johns Hopkins urologist Brian Matlaga became involved in a unique collaboration with Hospital Punta Pacífica in Panama. Matlaga, director of stone disease at Johns Hopkins and an internationally recognized expert in the use of laser technology for kidney stone removal, met recently with contributing editor David H. Freedman to talk about the field and his experience in Panama.

Is kidney stone treatment a bigger challenge for some countries than it is for others?

Kidney stones are a highly painful condition and affect up to 10 percent of the male population, especially in warmer regions. Most people don’t realize how big a problem they are, and in some countries they can be overlooked by health systems. Countries with some of the highest prevalence of the disease are often developing nations that may not be up to date with new treatment approaches, because they’re focusing on building up other types of care.

How are kidney stones treated?

There are several options. Large stones are often removed through direct surgery via an incision in the back. But the most common approach has been to break them up with focused sound waves, which offers the advantage of not requiring incisions. That procedure still typically requires at least light anesthesia and can cause bleeding, bruising and significant discomfort. And it often doesn’t result in removal of the stone, requiring repeated procedures that increase the cost and inconvenience. It also generally doesn’t work with very large stones.

Stones can also often be removed with a flexible scope, called a ureteroscope, which can be inserted through the urethra and past the bladder to reach the kidney stones in order to grab the stones. It’s an effective, less invasive treatment with good outcomes, but it, too, doesn’t work with larger stones.

So what is the best option for larger stones?

Over the past decade or so, a new technology has become the fastest growing option for larger stones. It uses the ureteroscope approach but adds a laser to the ureteroscope to break up the stones, so they can be removed in pieces. This usually works better than sound waves, because laser energy can be more precisely focused than sound waves, so there’s generally less damage to surrounding tissues. It also usually gets the job done in a single treatment. Urology residents here at Johns Hopkins now use it about 10 times as often as sound waves.

How did your work with Hospital Punta Pacífica (HPP) in Panama get started?

In 2009, I learned that HPP was eager to advance the capabilities of its urology department. A lot of kidney stone cases were turning up there, and urologists wanted to develop a state-of-the-art practice built around the laser ureteroscope. It sounded like a pretty interesting project. But there were some real challenges, too.

What were the challenges?

It’s been well established in the literature that hospitals adopting the laser approach often initially see a spike in complications, until practitioners gain experience. I didn’t want HPP to experience these complications. The best way to avoid that spike when getting a new group up to speed is to spend several weeks working alongside the surgeons who are learning, which is how we do it with interns here at Johns Hopkins. But I wouldn’t have that much time to spend at HPP. I needed to condense the learning experience into a few intense weeks in a way that didn’t compromise outcomes.

How did you do that?

My Johns Hopkins colleagues and I analyzed the literature to try to gain insight into what was behind the complications associated with laser adoption. What we found was that the main risks were imprecise lasering that can cause unnecessary bleeding and, even worse, underestimating the size of a stone that needs to be further broken up. Trying to pull out too large a piece can lead to tearing the urethra, a much more serious complication. We decided to concentrate on making sure surgeons quickly learned how to manage these specific problems.

To do that, we specially developed a concentrated curriculum that combined lecturing and demonstration with side-by-side surgeries. It was essentially a mini-fellowship. I was initially the lead surgeon there on these cases, with HPP urologists serving as my assistants. Then we started to switch, so that I served as assistant, with the first cases being carefully chosen to not be especially challenging. It helped that the HPP urologists learning the procedure were all skilled surgeons who only needed to learn how to apply their skills to a new technology.

What else did you do to help the department avoid complications?

Part of the curriculum was designed to bring nurses up to speed on the procedure. This is a very gadget-driven treatment that requires careful setup of equipment and excellent irrigation technique—failure to maintain a clear view of the stones through the scope makes it harder to be precise with the laser and to estimate stone size. We even brought in a nurse from the company that manufactures the laser scope to help us work with the HPP teams to fine-tune the needed routines.

Equipment maintenance is critical, too. We learned the hard way here at Johns Hopkins that using standard sterilizing procedures on the flexible scopes leads to premature failure because of how delicate the internal optical fibers are—and the required repairs can drive costs through the roof. So we taught the HPP staff the special equipment processing techniques we had devised ourselves.

What can you say about the results of the HPP project?

The program seems to have been an unqualified success. HPP urologists are performing the procedure routinely now, with minimal complication rates. Now, I’m looking forward to working on other Johns Hopkins Medicine International collaborations in Latin America and elsewhere.