It isn’t often that the Alan Mason Chesney Archives of the Johns Hopkins Medical Institutions receives a huge collection of personal papers that documents the career and contributions of an alumnus. But that just happened when W. Bruce Fye shipped forty-five boxes to the archives. Fye holds three degrees from Hopkins (BA 1968, MD 1972, MA in the History of Medicine, 1978) and completed his cardiology training here. He retired from Mayo Clinic in 2014 as a cardiologist, professor of medicine and the history of medicine, and as medical director of the institution’s Center for the History of Medicine, which was subsequently named for him.

Fye is very grateful for a career that combined his primary occupation as a cardiologist, his passion for historical research and writing, and his bibliomania. Many Johns Hopkins alumni acknowledge the vital role the institution played in their lives. But Fye takes it a step further, explaining that his tripartite career would never have happened without his Hopkins education and training and the encouragement and support of mentors, especially A. McGehee Harvey, Victor McKusick and Mike Weisfeldt. He has maintained close contact with Johns Hopkins over the decades and was elected to the Johns Hopkins Society of Scholars in 2005.

Thousands of letters donated to the archives trace Fye’s active involvement in cardiology, medical history, and medical book collecting. They are organized chronologically by topic to facilitate their use. Fye’s correspondence is complemented by hundreds of documents and pieces of ephemera that provide insight into the various contexts of his career and contributions. He had the privilege of serving as president of three organizations that reflect his main interests: the American College of Cardiology, the American Association for the History of Medicine and the American Osler Society.

Fye is optimistic that his papers will be useful to historians and others interested in the development of the specialty of cardiology, the evolution of the field of medical history, and trends in medical book collecting over the past half century. There are extensive records relating to his various leadership roles in the American College of Cardiology and the American Association for the History of Medicine and to his research that led to two books published by the Johns Hopkins University Press: The Development of American Physiology: Scientific Medicine in the Nineteenth Century (1987) and American Cardiology: The History of a Specialty and Its College (1996). The cardiology book won the Welch Medal of the American Association for the History of Medicine.

In order to facilitate formal processing of his personal papers, Fye developed a detailed inventory. Nancy McCall, director of the Chesney Archives, told Fye that the staff was “stunned and full of gratitude” for the fifty-page inventory he created. She explained, “You clearly have the archival skills, subject expertise, drive, and persistence to produce a superb collection inventory.” 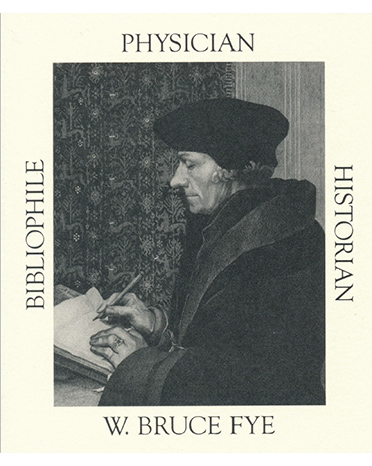 One component of archive relates to what Fye terms his bookish life. A book collector since the age of fourteen, he began focusing on medical books as a Hopkins medical student. William Osler, a humanistic physician whose passion for medical history and book collecting, served as a role model. Over the past decade Fye has been dispersing various thematic book collections that he assembled over the past half century. He has donated more than fifteen thousand medical books (primary and secondary sources) to Mayo Clinic. Bonhams held three auctions of medical and scientific books from his collection. Fye emphasizes the vital role that his wife Lois has played in his life and career. They met in high school in Bucks County, Pennsylvania and were married when he was a medical student and she was a nurse at Johns Hopkins.