Why Our Backs Can't Read Braille 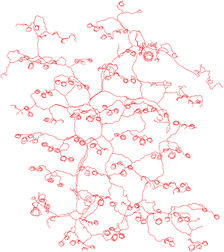 The twisted pathway of a single nerve cell in the skin on the back of a mouse. This particular cell has wrapped itself around at least 140 hair follicles.
eLife Journal, Creative Commons license, courtesy of Hao Wu

Johns Hopkins scientists have created stunning images of the branching patterns of individual sensory nerve cells. Their report, published online in the journal eLife on Dec. 18, details the arrangement of these branches in skin from the backs of mice. The branching patterns define ten distinct groups that, the researchers say, likely correspond to differences in what the nerves do and could hold clues for pain management and other areas of neurological study.

Each type of nerve cell that the team studied was connected at one end to the spinal cord through a thin, wire-like projection called an axon. On the other side of the cell’s “body” was another axon that led to the skin. The axons branched in specific patterns, depending on the cell type, to reach their targets within the skin. “The complexity and precision of these branching patterns is breath-taking,” says Jeremy Nathans, M.D., Ph.D., a Howard Hughes researcher and professor of molecular biology and genetics at the Institute for Basic Biomedical Sciences at the Johns Hopkins School of Medicine.

Skin is the body’s largest sensory organ, and the nerves that pervade it are responsible for sending signals to the brain—signals¬ perceived as sensations of pain, temperature, pressure and itch, to name a few. Stimuli that prompt signals, like a change in temperature, can come directly from the skin, or they can come from hair follicles embedded in the skin. Each hair follicle consists of a tiny cylinder of cells within the skin that surrounds the root of an individual hair.

Nathans says that many axons catalogued in their study wrapped themselves around hair follicles. Different types of axons contact the follicles in different ways and at different depths within the skin, presumably to collect particular kinds of information.

One of the challenges in visualizing axons arises because their overlapping, maze-like pathways make it very difficult to tell one from another. To overcome this hurdle, Nathans’ team, led by Hao Wu, Ph.D., a post-doctoral fellow in his lab, used a genetic trick to randomly color just a few dozen nerve cells out of the thousands in the skin of developing mice. Then Wu and colleague John Williams used software to trace the pattern of each nerve cell.

The axons of one type of nerve cell, for example, surrounded only a single hair follicle, its ends looking like a bear trap because of the vertical peaks flanking each hair column. Another type, accounting for 50 per cent of those the researchers saw, had 75 branch points, on average, allowing it to cover much larger areas and contact about 50 hair follicles per axon.

The axons of other nerve cell types were simpler and shorter, branching less but still encircling, like the tendrils of a vine, multiple hair follicles.  Still another type had endings that appeared more like brambles—less organized and bushier and without any connections to hair follicles. These types, too, could be more or less branched and, therefore, covered a particular area of skin more or less densely.

One of the most remarkable axon patterns looked like an extensive vine on a trellis, with its tendrils wrapping around approximately 200 hair follicles (see image). The total length of one of these axons, with all its branches, was several times longer than the body of a mouse.

Nathans says the images now in hand will help scientists “make more sense” out of known responses to stimulation of the skin. For example, if a single nerve cell is responsible for monitoring a patch of skin a quarter of an inch square, multiple simultaneous points of pressure within that patch will only be perceived by the brain as a single signal. “That is why we can’t read Braille using the skin on our backs: the multiple bumps that make up a Braille symbol are within such a small area that the axon branches can’t distinguish them. By contrast, each sensory axon on the fingertip occupies a much smaller territory and this permits our fingertips to accurately distinguish small objects.”

Nathans hopes that this new data can be paired with molecular and neurological data to determine the unique functions of each class of nerve cell that targets the skin. But he cautions that the ten categories they found are probably not exhaustive. “We know that there are other types of nerve endings in highly sensitive areas like our fingertips and lips.  Even within the skin on the backs of mice, we suspect that our technique was not able to capture every type of nerve cell.”

Many unanswered questions remain in this area, says Nathans, especially how these “beautiful branching patterns” are produced during embryonic development and what role(s) each type of nerve cell plays.

This work was supported by grants from the Human Frontier Science Program, the Johns Hopkins Brain Sciences Institute and the Howard Hughes Medical Institute.

Ouch: Making Sense Out of Sensation

On the web:
Link to article in eLife