Vitamin A Quells Severity of Preemie GI Disease in Mice 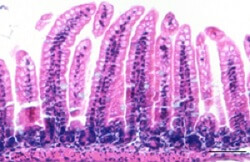 1 2 3
Tissue from a healthy mouse intestine.
Credit: Courtesy of the Journal of Clinical Investigation

After observing that some gastrointestinal disease in premature human and mouse infants progresses only when certain immune system white blood cells go into inflammatory overdrive, Johns Hopkins researchers have found that giving large doses  of vitamin A to mice converts those blood cells into inflammation suppressors and reduces the severity of the disease, compared to untreated mice.

The findings, which add to evidence of vitamin A’s anti-inflammatory properties, are published online Dec. 21 in the Journal of Clinical Investigation.

An estimated 5 to 10 percent of premature babies develop a severe form of bowel disease called necrotizing enterocolitis, an inflammatory condition marked by the death of intestinal tissue and lifelong digestive, lung and other impairments, if they survive. One in four infants who get the disease will die from it.

“It’s amazing and maybe a little humbling to think that a naturally occurring vitamin might put out the fire of such a devastating disease,” says David Hackam, M.D., Ph.D.,  surgeon-in-chief at the Johns Hopkins Children’s Center and professor of surgery at the Johns Hopkins University School of Medicine. “It’s a nasty disease for which there isn’t reliable treatment, and certainly no specific cure.”

Hackam cautions that the safety of high doses of vitamin A in children is not yet established and that additional studies must be performed before such therapy would be available to infants. That could take several years, he says.

For the study, Hackam and his team first analyzed the types of white blood cells in the intestines of human infants and newborn mice with the rodent form of the disease, focusing on the large number of of T cells they found there.

Of the T cells analyzed from diseased intestines, they found the majority consisted of inflammatory T cells — of the type CD4+ Th17 — and few inflammation suppressor cells, known as Tregs. In an unrelated study from the La Jolla Institute for Allergy and Immunology, investigators showed that retinoic acid, a compound derived from vitamin A, reduced the level of inflammatory T cells and increased the level of inflammation suppressor T cells.

The researchers used this knowledge to test whether changing the balance of the T cells would reduce the severity of the disease in mice with necrotizing enterocolitis. They fed the mice 50 micrograms of vitamin A daily for four days, considered a fairly low dose. When they looked at the intestines of the diseased mice fed vitamin A, they looked more like healthy intestines than diseased ones.

“This interaction between the T cells and the intestine seems to feed the fire in developing the disease,” says Hackam.

The photos that accompany this article are available for download.

We are providing these photos with the understanding that they will be used only to help illustrate the article in the corresponding news release. Please use the credit information provided. If there is anything else you need, please email us at JHMedia@jhmi.edu. Thank you.