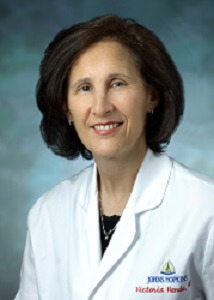 Handa also serves as the director of the Division of Female Pelvic Medicine and Reconstructive Surgery at Johns Hopkins, and she holds a joint appointment in the Department of Epidemiology at the Johns Hopkins Bloomberg School of Public Health.

Handa is an internationally recognized leader in female pelvic medicine and reconstructive surgery. She and her research team at the Johns Hopkins Women’s Center for Pelvic Health specialize in women’s health research, epidemiology and pelvic floor disorders, including incontinence, pelvic organ prolapse and related conditions. She is a reconstructive surgeon and the author of more than 100 scientific papers. She has also provided advanced training to physicians for almost 20 years.

Since 2008, she has led the Mothers’ Outcomes After Delivery study, a collaborative research effort between The Johns Hopkins University and Greater Baltimore Medical Center.

Handa is a member of the American Urogynecologic Society, the American Congress of Obstetricians and Gynecologists, and the Association of Professors of Gynecology and Obstetrics.

Previously, she was chief of the Division of Gynecology and director of urogynecology at the University of California, Davis.

“Vicki Handa is a true ‘triple threat,’” says Andrew Satin, M.D., director of the Johns Hopkins Department of Gynecology and Obstetrics. “She’s an outstanding clinician and educator, and she is currently supported by two research grants from the National Institutes of Health. I am thrilled to have her as a key part of our Johns Hopkins Gyn/Ob leadership team. She will truly be a tremendous academic leader on the Johns Hopkins Bayview campus.”