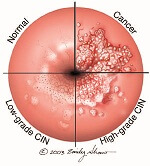 Stages of Cervical Cancer
Emily Shaw
Preliminary results of a small clinical trial show that a vaccine used to treat women with high-grade precancerous cervical lesions triggers an immune cell response within the damaged tissue itself. The Johns Hopkins scientists who conducted the trial said the finding is significant because measuring immune system responses directly in the lesions may be a more accurate way to evaluate so-called "therapeutic" vaccines than by the conventional means of blood analysis.
"It's difficult to measure immune cell responses to therapeutic vaccines, but we believe that clinical studies could tell us more about the value and function of the vaccines if we check for the response in the lesions, where the immune system is fighting precancerous cells," says Connie Trimble, M.D., associate professor of gynecology and obstetrics, oncology and pathology at Johns Hopkins' Kimmel Cancer Center.
Results of the first 12 women enrolled at Johns Hopkins on a clinical trial led by Trimble are reported online in the Jan. 27 issue of Science Translational Medicine. Each of the women was diagnosed with high-grade precancerous cervical lesions linked to a strain of the human papillomavirus (HPV16) most commonly associated with cervical cancer. In a bid to treat the lesions and prevent cervical cancer, they received three vaccine injections in the upper arm over an eight-week period.
Two types of vaccines were used for the study: one constructed with genetically engineered DNA molecules that teach immune system cells to recognize premalignant cells expressing HPV16 E7 proteins, and one that is a non-infectious, engineered virus that targets and kills precancerous cells marked by HPV16 and HPV18 E6 and E7 proteins.
Seven weeks after the third vaccination, the investigators surgically removed cervical lesions from all of the women. Blood samples and cervical tissue were collected from each patient at the beginning and end of the trial, letting scientists compare immune cell responses before and after vaccination.
In three of six patients treated with the highest dose of the vaccine, and one patient in each of the two groups receiving lower doses of the vaccine, the cervical lesions disappeared.  The first patient was treated in 2008, and the 12th in 2012. None of the 12 patients has, so far, developed more lesions.
Among those vaccinated, the investigators found significant increases of CD8 T-cells, the "killer" cells of the immune system, in cervical tissue. Blood samples failed to show as strong a pre- and postvaccination effect. The investigators also said the vaccine did not have the unwanted consequence of altering the number of T-regulatory cells, which suppress immune system responses.
"We found striking immune system changes within cervical lesions, which were not as evident in the patients' peripheral blood samples," says Trimble.
The investigators also measured gene expression of postvaccinated cervical cells in three of the patients and found increased expression of several genes (CXCR3, Tbet and IFN-beta) associated with activation of the immune system. They found many similarities in T-cell receptors in the cervical tissue of two of the vaccinated patients, "suggesting that the T-cells are seeing the same thing," says Trimble.
The Johns Hopkins team says it plans to enroll some 20 more patients, testing a combination of the vaccines and a topical cream to enhance the immune response locally.
Trimble explains that the location of cervical lesions gives scientists an advantage in their vaccination approach. "It's important that we can monitor these cervical lesions closely," says Trimble.
She says that the conventional practice of measuring vaccine effectiveness via blood tests probably began with mouse models used for immunotherapy research. "But the way that HPV and the immune system behave in humans may be far different," she says.
HPV causes nearly all cervical, anal, vaginal, and penile cancers and nearly two-thirds of oral cancers. In the cervix, about 20 to 25 percent of high-grade lesions will disappear spontaneously. Because there is no standard way to predict lesions that will disappear, the current standard of care for these lesions is surgical removal. Current preventive vaccines for HPV are not effective on women already exposed to the ubiquitous virus.
Funding for the research and clinical trial was provided by the National Institutes of Health's National Cancer Institute (CA123876, CA14269101, CA098252, CA006973) and the Dana Foundation.
Scientists contributing to the research include Leonel Maldonado, T.C. Wu and Chenguang Wang at Johns Hopkins; Jessica Teague and Rachael Clark at Brigham and Women's Hospital; Matthew Morrow at Inovio Pharmaceuticals; Iveta Yotova and Benjamin Tycko at Columbia University; Cindy Desmarais at Adaptive Biotechnologies; Jean Boyer at the University of Pennsylvania; and Harlan Robins at the Fred Hutchinson Cancer Research Center.
Wu is a founder of Papivax LLC and owns stock. Robins owns stock and consults for Adaptive Biotechnologies, which helped conduct sequencing studies described in this report. Desmarais is employed by and has equity ownership in Adaptive Biotechnologies. Clark has stock in TremRx and is the scientific advisor for the Alopecia Areata Initiative, a nonprofit organization.