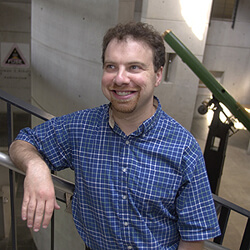 Two Johns Hopkins University professors — a physician who champions scientifically rigorous, common-sense approaches to improving patient safety and an astrophysicist who was a leader in the discovery of the universe's "dark energy" — were named today as winners of MacArthur Fellowships, the so-called "genius grants."

The John D. and Catherine T. MacArthur Foundation announced that it has awarded "no-strings attached" $500,000 grants to Peter J. Pronovost, professor of anesthesiology, surgery and critical care in the university's School of Medicine, and Adam Riess, professor of physics and astronomy in the Zanvyl Krieger School of Arts and Sciences.

Pronovost and Riess, who are among 25 fellows in this year's MacArthur class, are the eighth and ninth persons to win MacArthur Fellowships while on the Johns Hopkins faculty. At least two other winners have joined Johns Hopkins after receiving MacArthur awards. "At Johns Hopkins, the goal of all of the research we do is to make meaningful and lasting contributions to humanity," said William R. Brody, president of the university. "Adam Riess's startling and bold discovery of the existence of dark energy has transformed the way we view the universe and has radically altered cosmology. Peter Pronovost's design of clinical care practices is saving the lives of countless patients who might otherwise have been lost to human error and infection. We thank the MacArthur Foundation for recognizing these outstanding individuals and their efforts. We are fortunate to have them here at Johns Hopkins."

MacArthur Fellowships provide financial support over five years for the work of individuals selected for their creativity, originality and potential to make important future contributions, the foundation said. A total of 781 MacArthur Fellows have been named since the program began in 1981. Winners do not apply for the grants, and may not even be aware that their names have been suggested by the foundation's cadre of anonymous nominators.

Riess, 38, was recognized for his leadership in discovering that dark energy, a mysterious and still-unexplained force, is driving the universe to expand at an ever-faster rate, overcoming the effects of gravity. He was first author on a paper published in 1998 by one of two competing groups of scientists that made the discovery; his innovative approach involved comparisons of the "redshift" of rare Type Ia supernovas spotted at varying distances from Earth in the farthest reaches of space. He has shared two of cosmology's most prestigious prizes — the 2006 Shaw Prize and the Peter Gruber Foundation's 2007 Cosmology Prize — for this discovery.

"Adam Riess's work has done nothing less than revolutionize — in ways we would have thought impossible — our entire understanding of the past and future of space and time," says Adam Falk, James B. Knapp Dean of the Kreiger School of Arts and Sciences at Johns Hopkins. "His discovery of the acceleration of the expansion of the universe was one of the great discoveries of the 20th century, and has completely reoriented not one but two fields, cosmology and high-energy physics, for the coming 21st. Adam's scientific vision and courage are a source of enormous pride for all of us in the Krieger School of Arts and Sciences."

Riess graduated in 1992 from the Massachusetts Institute of Technology and earned a master's in 1994 and a PhD in 1996 from Harvard University. He has been on the Johns Hopkins faculty since 2006 and is also an astronomer at the Space Telescope Science Institute in Baltimore.

From 1996 to 1999, the period when the dark energy discovery was made, he was a Miller Fellow at the University of California, Berkeley. Since then, Riess has led rigorous efforts to use the Hubble Space Telescope to increase the precision of the dark energy findings, which are important not only for comprehending the makeup of the universe but also for understanding its history and future and in unraveling other important questions in theoretical physics.

"It is a tremendous honor to be recognized by the MacArthur Fellowship," Riess said. "I am very fortunate to work with talented people and with one of the most advanced scientific tools in the Hubble Space Telescope."

Pronovost, 43, is an internationally prominent critical care specialist, patient safety researcher and advocate who was named one of the "most influential people of 2008" by Time Magazine for advancing the use of rigorous scientific research to develop simple tools for greatly improving patient safety and care. His simple "safety checklist" has been adopted in Rhode Island, New Jersey and Michigan, where its routine application reduced catheter-related bloodstream infections in patients by up to 66 percent. Pronovost has written more than 200 articles and chapters in the fields of patient safety, ICU care, quality health care, evidence-based medicine and safety efforts.

"While it's rare for research to impact practice, and rarer still for it to impact policy, Peter has a knack for conducting research that does both," said Edward D. Miller, dean of the School of Medicine and CEO of Johns Hopkins Medicine. "As medical director for Johns Hopkins' Center for Innovation in Quality Patient Care and a member of the hospital's Patient Safety Committee, he has been a tireless advocate for the development of innovative, field- tested and practical patient safety tools, and is a frequent speaker to hospital staff, health care administrators, policy makers, and patient safety groups."

Pronovost also serves as a faculty member in health policy at the Johns Hopkins University Bloomberg School of Public Health, where he established a World Health Organization-sponsored master's degree program that focuses on improving clinical performance and patient safety.

"I was stunned when I learned I have been given this great honor," Pronovost said. "I knew of the MacArthur as the genius' award and did not think I fit that description. We try to prevent needless deaths, suffering and costs of healthcare by bringing science to the delivery of care. By necessity, the science has to be made practical and easy to implement. Indeed, it only works if we find the right balance between being scientifically sound and simple and then applying these principals to real-world problems. While we are certainly grateful to the MacArthur Foundation for this wonderful honor, our true reward is saving lives and reducing harm."

This is the second time that two Johns Hopkins faculty members have won MacArthur grants in a single year and the third time that Johns Hopkins professors have been honored in consecutive years. Professors Kay Redfield Jamison and Geraldine Seydoux, both of the School of Medicine, were named MacArthur Fellows in 2001. The most recent previous winner was Lisa Cooper, a professor of medicine with joint appointments in nursing and public health, a year ago.

A list of previous Johns Hopkins winners is below. Digital photos of Adam Riess and Peter Pronovost are available. Contact Lisa De Nike at Lde@jhu.edu or 443-287-9960.