Two Human Proteins Found To Affect How “Jumping Gene” Gets Around 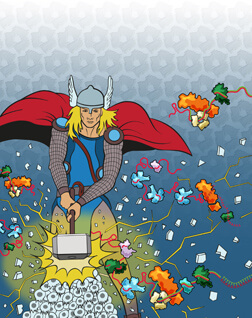 Caption: A dramatic rendering of a technique used in this study, in which frozen cells were broken open to reveal interactions among the molecules inside.
Credit: Sigrid Knemeyer/Johns Hopkins University School of Medicine

Using a new method to catch elusive “jumping genes” in the act, researchers have found two human proteins that are used by one type of DNA to replicate itself and move from place to place. The discovery, described in the Nov. 21 issue of Cell, breaks new ground, they say, in understanding the arms race between a jumping gene driven to colonize new areas of the human genome and cells working to limit the risk posed by such volatile bits of DNA.

Jumping genes, more formally known as transposons or transposable elements, are DNA segments with the blueprints for proteins that help to either copy the segment or remove it, then insert it into a new place in the genome. Human genomes are littered with the remnants of ancient jumping genes, but because cells have an interest in limiting such trespasses, they have evolved ways to regulate them. Most jumping genes have mutated and can no longer move, but these “rusting hulks” are still passed down from generation to generation.

One exception is a jumping gene called L1, which has been so successful that copies of it make up about 20 percent of human DNA. While many of these copies are now mutated and dormant, others are still active and thus the subject of much interest from geneticists.

“Human cells have evolved ways of limiting jumping genes’ activity, since the more frequently they move, the more likely they are to disrupt an important gene and cause serious damage,” says Lixin Dai, Ph.D., a postdoctoral associate at the Johns Hopkins Institute for Basic Biomedical Sciences, who led the study. To find out more about how cells control L1 and what tricks the jumping gene uses to get around these defenses, Dai and others in the laboratory of Jef Boeke, Ph.D., first induced lab-grown human cells to make large amounts of the proteins for which L1 contains the blueprints. As expected, the two types of L1 protein joined with human proteins and genetic material called RNA to form so-called ribonucleoprotein particle complexes, which L1 uses to “jump.”

To find out which human proteins interact with ribonucleoproteins – and are therefore likely to have a role in either tamping down its activity or helping it along – Boeke’s team collaborated with researchers at The Rockefeller University who had developed a technique for fast-freezing yeast with liquid nitrogen, then grinding it up for analysis with steel balls and very rapidly pulling out the ribonucleoproteins with tiny magnetic particles. “It’s a good way of preserving the interactions,” Dai says.

Adapting this powerful technique to human cells, the team found 37 proteins that appear to interact with the ribonucleoprotein, and they selected two for further analysis. One of these, UPF1, is known for its role in quality control; it monitors the RNA transcripts that carry instructions from DNA to the cell’s protein-making machinery and destroys those with mistakes. In this case, Dai says, UPF1 binds to the L1 ribonucleoprotein, probably because L1 RNA contains instructions for two proteins rather than one – a red flag for UPF1. When the researchers disabled the UPF1 gene, cells produced more L1 RNA and protein. But they still haven’t figured out exactly how UPF1 interacts with the ribonucleoprotein, Dai says.

The other human protein, PCNA, helps to copy DNA strands before a cell divides into two. The researchers found that PCNA interacts with a critical segment of one of the ribonucleoprotein’s L1 proteins; when they tried altering that section, L1 could no longer jump. In contrast to UPF1’s role in suppressing L1 activity, Dai says PCNA seems to have been co-opted into helping the jumping gene, perhaps by repairing gaps left in human DNA after L1 splices itself into a new spot.

Dai notes that these discoveries would not have been possible without two methods pioneered in this study: growing large quantities of human cells and inducing them to make ribonucleoprotein, and adapting the fast-freezing technique to study interactions in human cells. He expects that these methods will enable biologists to greatly increase their understanding of L1, a jumping gene that has played a key role in the evolution of the human genome and whose activity has been implicated in some cancers.

“Our study shows how the jumping gene tries to be smart and get around the host cell’s control mechanisms, and how the host tries to minimize its activity,” Dai says. “We’re looking forward to learning more about this arms race.”

Scientists Identify DNA That May Contribute to Each Person’s Uniqueness