Two from Johns Hopkins Elected to National Academy of Sciences 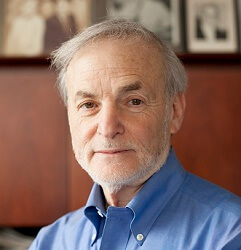 Johns Hopkins University faculty members Stephen B. Baylin, M.D., and Robert F. Siliciano, M.D., Ph.D., have been elected to the National Academy of Sciences in recognition of their “distinguished and continuing achievements in original research.”

They are among 84 new members and 21 foreign associates elected.

Baylin is the Virginia and D.K. Ludwig Professor of Oncology and Medicine, co-director of the Cancer Biology Division and associate director for research programs at the Sidney Kimmel Comprehensive Cancer Center at Johns Hopkins.

His research interests include cellular biology and genetics of cancer, specifically epigenetics or genetic modifications other than those in DNA that can affect cell behavior, as well as the silencing of tumor suppressor genes and tumor progression.

Baylin served on the American Association for Cancer Research Board of Directors from 2004 through 2007 and is an associate editor of Cancer Research. He has authored or co-authored more than 400 publications. In April, he was elected to the Association of American Physicians.

Siliciano is a professor of medicine in the Infectious Diseases Department and an investigator in the Howard Hughes Medical Institute. He studies HIV, specifically viral reservoirs that prevent curing HIV infection and works to better understand how the T-cell reservoir is established and maintained.

His work has been recognized by a Distinguished Clinical Scientist Award from the Doris Duke Charitable Foundation and two merit awards from the National Institutes of Health.

About the National Academy of Sciences

The National Academy of Sciences is a private, nonprofit institution that was established under a congressional charter signed by President Abraham Lincoln in 1863. It recognizes achievement in science by election to membership, and — with the National Academy of Engineering, Institute of Medicine and National Research Council — provides science, technology and health policy advice to the U.S. government.