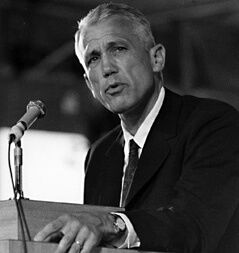 Remembered as an intensely charismatic leader and a brilliant physician-scientist by generations of students and colleagues, Cooke was not only a prolific academician and bioethicist, but also an ardent and tough advocate for child health and a political power broker who shaped child health policy on a national scale, medical leaders at Johns Hopkins and elsewhere say.

He was the catalyst behind Head Start, the federal program that provides academic and social services to millions of low-income children and their families each year. Cooke's contributions, which run the gamut from bench science to clinic to public health, have collectively improved the health of generations of children in this country and worldwide, say those who knew him.

"We have lost a true visionary, whose acumen, passion and dedication have influenced generations of pediatricians and changed the lives of millions of children," says Paul B. Rothman, M.D., dean of the medical faculty and CEO of Johns Hopkins Medicine.

Cooke was somewhat of a medical Renaissance man. He studied metabolic disorders, nutritional deficiencies and cystic fibrosis with the same zeal that he applied to his study of the psychological effects of hospitalization on children and families. In his research, Cooke explored topics as diverse as pre-natal diagnosis of fetal disorders and the ethical and legal aspects of mental retardation. Even though he spent countless hours in the lab, Cooke's mind was ceaselessly fascinated by matters outside of the test-tube and, indeed, beyond the purely medical. He wrote essays and commentaries that ventured into the realms of social justice and philosophy, including "Natural and Nurtural Limitations on a Free Society," "The Free Choice Principle in the Care of the Mentally Retarded," and a memorable farewell address titled "The Gorks Are Gone." In 1965, Cooke co-authored a still-classic textbook The Biosocial Basis of Mental Retardation, a seminal treatise on intellectual disability.

"Bob was not only a brilliant scientist and an enormously talented clinician, but also one of the most progressive and influential pediatricians in America, whose work reshaped the Department of Pediatrics at Hopkins and child health on a national scale," says George Dover, M.D., Johns Hopkins' pediatrician-in-chief and director of the Johns Hopkins Children's Center.

Cooke's friendship with the Kennedy family - he was senior medical adviser to President John F. Kennedy and family pediatrician to the president's sister, Eunice Kennedy Shriver, an early advocate for people with mental retardation - allowed him to shape U. S. public health policy on mental disabilities. In 1961, Cooke chaired a task force to study child development whose report called on the White House to form a federal agency that would study developmental disorders. That document became the blueprint for the National Institute of Child Health and Human Development (NICHD), the federal agency within the National Institutes of Health that studies maternal, fetal and child health and issues treatment guidelines. Much of what is considered standard practice in the care and treatment of premature babies, newborn screening and childhood immunizations is based on NICHD-funded research, and the creation of the agency paved the way for the study of mental retardation and developmental disabilities as a pediatric sub-specialty.

In 1964, under marching orders from President Lyndon B. Johnson and his "War on Poverty" campaign, Cooke headed a task force of sociologists, pediatricians and psychologists to develop a national program - eventually known as Head Start - to help children born in poverty overcome social and education obstacles. Today, the program provides health, nutrition and social services to more than a million children and their families each year.

If Cooke's work helped redefine child health globally, his leadership of the Department of Pediatrics at Johns Hopkins from 1956 to 1973 was nothing short of transformative, Dover says. It was on Cooke's watch that the children's hospital moved from its original Harriet Lane Home to the Children's Medical and Surgical Center, which housed the children's hospital at Johns Hopkins from 1964 to 2012. Conceived to help scientists collaborate, and thus accelerate, the study of childhood disease and human development, the then-new building was widely viewed as one of Cooke's crowning achievements.

Cooke also had an impeccable eye for talent.

He recruited a cadre of young physicians who later became luminaries in their specialties. Among them are pediatric endocrinologist and world renowned expert on disorders of sex differentiation Claude Migeon, M.D.; pediatric endocrinologist Robert Blizzard, M.D., who elucidated the critical role of growth hormone in child development; and nephrologist and metabolism specialist Saul Brusilow, M.D., who discovered new biochemical pathways and treatments for a group of inherited metabolic diseases known as urea cycle disorders.

Brusilow, who had followed Cooke from Yale University to Johns Hopkins, calculated that 22 pediatric residents who trained at Johns Hopkins during Cooke's tenure, went on to become department chairs, and 104 have held positions in academic medicine.

"He impressed upon us the importance of advancing knowledge, not just preserving and transmitting it," Brusilow says. Jerry Winkelstein, M.D., the former director of the Division of Allergy and Immunology at the Johns Hopkins Children's Center and Cooke's last chief resident, describes his mentor as a man of "grand vision and powerful charisma" so deeply invested in the growth and future of fledgling physicians that he had weekly lunches with pediatric interns and residents to get to know each and every one of them outside the lab and clinic.

"He knew their backgrounds, their dreams, hopes and aspirations," Winkelstein says. "He was a charismatic leader who knew how to cultivate talent and grow relationships."

Norman Fost, M.D., M.P.H., professor of pediatrics and bioethics at the University of Wisconsin, one of Cooke's chief residents at Johns Hopkins and a pioneer in the modern bioethics movement, recalls his mentor's intense loyalty to colleagues, students, and residents.

"In the political arena, he had a deserved reputation as a tough guy who kept his eye on the goal and got things done," Fost says. "But he was a real softie when it came to people who worked with him. He was very reluctant to dismiss a resident who was underperforming, urging us to find a way to help the individual succeed."

Fost also treasured his life-long friendship with Cooke, recalling a poignant episode when Cooke was introducing Fost for a public lecture and described his relationship as a "son complex."

"He said, 'Some people have a father complex toward their mentors. Well, I have a son complex with Norm,'" Fost says.

Fost credits Cooke as a major figure in the emergence of bioethics as an area of scholarship and national discourse. He had the courage to make a movie, with the support of the Kennedy Foundation, about a controversial Hopkins case involving a child with Down syndrome, whose parents and physicians allowed him to die without the benefit of standard medical treatment, Fost says.

"It was the first case of its kind to be brought out of the closet, and following a celebrity-studded premier at the Kennedy Center in Washington, it stimulated a decade of national discussion and the creation of bioethics programs at academic medical centers," Fost says.

Colleagues also recalled Cooke as a skilled and competitive athlete, earning a tryout with the Boston Red Sox after a baseball career at Yale; as a high-level tennis player; and as a tough opponent in annual faculty-house staff touch football games.

Much of Cooke's scientific work focused on understanding metabolic dysfunction and nutritional deficiencies of early childhood. His work on the physiology of salt and water metabolism led to changes in infant feeding practices worldwide and helped reduce childhood death rates. In the late 1950s, Cooke mentored a young colleague, Lewis Gibson, M.D., in the development of a painless, rapid method of sweat collection to diagnose cystic fibrosis - a test known as the Gibson-Cooke sweat test, which remains in use today. The test allowed pediatricians to diagnose children more safely and more accurately, which resulted in more timely treatment and, ultimately, improved survival.

But, colleagues say, nowhere was Cooke's passion as intense as it was in the study of mental retardation, a passion fueled not by scientific curiosity but by personal experience. Cooke was the father of two daughters, born in 1948 and 1951, with a genetic disorder called cri-du-chat syndrome, characterized by intellectual disability and delayed development.

Cooke was born on Nov. 13, 1920, in Attleboro, Mass. He earned a bachelor's of science from Yale University's Sheffield Scientific School in 1941 and a medical degree from the Yale School of Medicine in 1944. Cooke completed his internship and residency at New Haven Hospital, taking two years off from his medical apprenticeship to serve in the U.S. Army Medical Corps. In 1950, Cooke joined the pediatrics faculty at Yale. In 1956, Cooke left his alma mater for Johns Hopkins where he became director of the Department of Pediatrics and director of the Children's Center.

Cooke left Hopkins in 1973 to become vice chancellor for health sciences at the University of Wisconsin-Madison. In 1977, Cooke became president of the Medical College of Pennsylvania and, later, the pediatrician-in-chief at Buffalo Children's Hospital. He retired in 1989.

Cooke is the recipient of numerous awards, including the John Howland Award in pediatrics, considered by many as the specialty's most prestigious accolade, as well as the American Academy of Pediatrics' top bioethics tribute, the William G. Bartholome Award for Ethical Excellence, named for the late William Bartholome, who had been one of Cooke's residents.