Johns Hopkins researchers describe how every hair in skin feels touch and how it all gets to the brain
Release Date: January 10, 2012 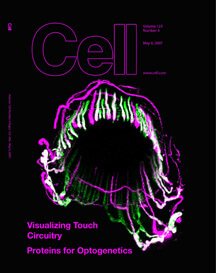 Neuroscientists at the Johns Hopkins University School of Medicine have discovered how the sense of touch is wired in the skin and nervous system. The new findings, published Dec. 22 in Cell, open new doors for understanding how the brain collects and processes information from hairy skin.

“You can deflect a single hair on your arm and feel it, but how can you tell the difference between a raindrop, a light breeze or a poke of a stick?” says David Ginty, Ph.D., professor of neuroscience at Johns Hopkins. “Touch is not yes or no; it’s very rich, and now we’re starting to understand how all those inputs are processed.”

Ginty and his colleagues study how the nervous system develops and is wired. In trying to understand how touch-responsive nerve cells develop, they set out to build new tools that enable them to look at individual nerve cells. According to Ginty, there are more than 20 broad classes of so-called mechanosensory nerve cells in the skin — of which only six account for light touch — that sense everything from temperature to pain. But until now, the only way to tell one cell from another was to take electrical recordings as each type of cell generates a different current based on what it senses.

The team first genetically engineered mice to make a fluorescent protein in one type of nerve cell — called the C-type low-threshold mechanosensory receptor or C-LTMR. C-LTMR cells stretch from the spinal cord to the skin, and those cells containing fluorescent protein could be seen in their entirety under a microscope. The team found that each C-LTMR cell branched to send projections to as many as 30 different hair follicles.

Mice have three different types of hair: a thick, long guard hair that accounts for only about 1 percent of total hairs on the body; a shorter hair called the awl/auchene that constitutes about 23 percent of body hair; and a fine hair called the zigzag that makes up 76 percent of body hair.  The team found that most of the C-LTMR cell endings — about 80 percent — associate with zigzag hair follicles, the rest with the awl/auchene and none with the guard hair follicles.

The team then wondered how all the input from these individual hairs is collected and sent to the brain. Using a different dying technique, the researchers were able to stain the other end of the cell, in the spinal cord. They found that the nerves connecting each patch of skin containing one guard hair and other associated smaller hairs line up in columns in the spinal cord — neighboring columns correspond to neighboring patches of skin. They estimate that there are about 3,000 to 5,000 columns in the spinal cord, with each column accounting for 100 to 150 hair follicles.

So how does the brain interpret what each hair follicle experiences? “How this happens is remarkable and we’re fairly clueless about it,” says Ginty. But he suspects that the organization of the columns is key to how all the various inputs are processed before a message goes to the brain. And while people are not as hairy as mice, Ginty believes that many of the same structures are shared. This study and the new cell-marking tools they developed, he says, open a lot of doors for new research in understanding touch and other senses.

This study was funded by the National institutes of Health, the Johns Hopkins NINDS core imaging facility and the Howard Hughes Medical Institute.

Authors on the paper are Lishi Li, Michael Rutlin, Victoria Abraira, Wenqin Luo and David Ginty of Johns Hopkins; Colleen Cassidy and C. Jeffery Woodbury of University of Wyoming; Laura Kus, Shiaoching Gong and Nathaniel Heintz of the Howard Hughes Medical Institute and The Rockefeller University; and Michael Jankowski and H. Richard Koerber of University of Pittsburgh School of Medicine.

His And Hers: Male Hormones Control Differences In Mammary Gland Nerve Growth