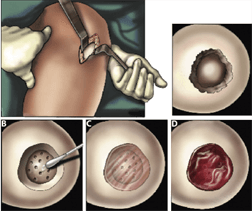 An illustration of the cartilage repair surgical procedure. A mini-incision exposes the cartilage defect (top left-hand panel), and any dead tissue is removed from the edges. (B) The adhesive is then applied to the base and walls of the defect, followed by microfracture. (C) Lastly, the hydrogel solution is injected into the defect. (D) Bleeding from the microfracture holes is trapped in and around the hydrogel.
Science Translational Medicine/AAAS

In a small study, researchers reported increased healthy tissue growth after surgical repair of damaged cartilage if they put a “hydrogel” scaffolding into the wound to support and nourish the healing process. The squishy hydrogel material was implanted in 15 patients during standard microfracture surgery, in which tiny holes are punched in a bone near the injured cartilage. The holes stimulate patients’ own specialized stem cells to emerge from bone marrow and grow new cartilage atop the bone.

Results of the study, published in the Jan. 9 issue of Science Translational Medicine, are a proof of concept that paves the way for larger trials of the hydrogel’s safety and effectiveness, the researchers say.

“Our pilot study indicates that the new implant works as well in patients as it does in the lab, so we hope it will become a routine part of care and improve healing,” says Jennifer Elisseeff, Ph.D., Jules Stein Professor of Ophthalmology and director of the Johns Hopkins University School of Medicine’s Translational Tissue Engineering Center (TTEC). Damage to cartilage, the tough-yet-flexible material that gives shape to ears and noses and lines the surface of joints so they can move easily, can be caused by injury, disease or faulty genes. Microfracture is a standard of care for cartilage repair, but for holes in cartilage caused by injury, it often either fails to stimulate new cartilage growth or grows cartilage that is less hardy than the original tissue.

Tissue engineering researchers, including Elisseeff, theorized that the specialized stem cells needed a nourishing scaffold on which to grow, but demonstrating the clinical value of hydrogels has “taken a lot of time,” Elisseeff says. By experimenting with various materials, her group eventually developed a promising hydrogel, and then an adhesive that could bind it to the bone.

After testing the combination for several years in the lab and in goats, with promising results, she says, the group and their surgeon collaborators conducted their first clinical study, in which 15 patients with holes in the cartilage of their knees received a hydrogel and adhesive implant along with microfracture. For comparative purposes, another three patients were treated with microfracture alone. After six months, the researchers reported that the implants had caused no major problems, and MRIs showed that patients with implants had new cartilage filling an average 86 percent of the defect in their knees, while patients with only microfracture had an average of 64 percent of the tissue replaced. Patients with the implant also reported a greater decrease in knee pain in the six months following surgery, according to the investigators.

The trial continues, has enrolled more patients and is now being managed by a company called Biomet. The trial is part of efforts to win European regulatory approval for the device.

In the meantime, Elisseeff says her team has begun developing a next-generation implant, one in which the hydrogel and adhesive will be combined in a single material. In addition, they are working on technologies to lubricate joints and reduce inflammation.

Intellectual property related to the hydrogel and adhesive technology is owned by The Johns Hopkins University (patent application nos. 20070098675, 20090324722 and 20100003329) and Biomet (patent application no. 7897165). Funding for the biomaterials work was provided by the Arthritis Foundation, the National Institute of Arthritis and Musculoskeletal and Skin Diseases  (grants R01AR054005,  1K24AR062068-01), the National Institute of Biomedical Imaging and Bioengineering (5R01EB005517, 2R01EB002524-08) and the National Institutes of Health (1P01159992-01). Large-animal studies were supported by the Maryland Technology Development Corporation and Cartilix, Inc. Clinical studies were supported by Cartilix, Inc. and Biomet.