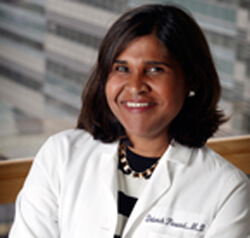 Time magazine has named Johns Hopkins Children’s Center HIV expert Deborah Persaud, M.D., one of the world’s 100 most influential people for 2013. A virologist and an infectious disease specialist, Persaud is being recognized for her research and clinical work in pediatric HIV and AIDS.

Persaud was propelled into the spotlight in early March when she and colleagues Hanna Gay, M.D., of the University of Mississippi Medical Center, and Katherine Luzuriaga, M.D., of the University of Massachusetts Medical School, announced the first functional cure of HIV in an infant. A functional cure occurs when a person is able to keep the virus at clinically undetectable levels over the long term even after stopping treatment. While Persaud and her colleagues cautioned the infant’s unusual case requires further study and people with HIV should not discontinue treatment, they also hailed it as a potential game-changer supporting the notion that very early treatment quashes the formation of the viral hideouts that make the virus impossible to clear. HIV’s ability to form such hideouts shortly after infection is one of the virus’s most vexing quirks and one that stymies cure. The newborn was treated with antiretroviral therapy unusually early, which the experts believe prevented the development of reservoirs and led to the child’s eventual functional cure. In contrast to a sterilizing cure — a complete eradication of all viral traces from the body — a functional cure occurs when viral presence is so minimal, it remains undetectable by standard clinical tests, yet may be discernible by ultrasensitive methods.

“Debbie Persaud’s work has sparked renewed interest in finding a cure for a disease that was some time ago chalked up as incurable,” says Johns Hopkins Children’s Center Director George Dover, M.D. “Her perseverance and passion have paid off and illuminated some new strategies to improve both prevention and treatment of pediatric HIV.”

Even though Persaud’s work gained mainstream attention only recently, she has been active in the field of pediatric HIV for nearly two decades. Her research has focused on understanding some of HIV’s most complex behaviors, including its ability to mutate and to develop resistance to drugs. Persuad’s other work has focused on strategies to prevent mother-to-child transmission in underdeveloped countries, where children have been hit the hardest.

HIV is a daunting, shape-shifting virus in its ability to mutate quickly, Persaud says, and its tendency to form viral reservoirs and become impervious to both drugs and immune defenses not only hinder vaccine development, but also require periodic changes to the life-long treatment to ensure the virus is kept in check. The viral sanctuaries develop when HIV sets up camp in tissues and organs where the virus lies dormant for years. As soon as antiviral therapy is stopped, HIV emerges from hiding to reignite full-blown infection.

“Solving these challenges will require a far more precise and far more profound understanding of the basic biology behind HIV’s most intricate maneuvers and the tricks it uses to highjack a child’s immature immune cells and linger on — that is the focus of my work,” Persaud says.

Persaud spearheaded much of the early research in this field in the late 1990s and early 2000s by conducting some of the first studies of viral reservoirs in infected babies, children and teens at Johns Hopkins.

In fact, Persaud’s lab at the Johns Hopkins Children’s Center is a world leader in the study of HIV reservoirs in children. Persaud uses Hopkins-developed ultrasensitive molecular tests that offer unmatched accuracy in detecting such viral hideouts.

Persaud grew up in Guyana and came to the United States as a teenager. She received her medical degree from the New York University School of Medicine and completed a residency at Babies Hospital at Columbia-Presbyterian Medical Center in New York, where she also served as chief resident. Persaud completed her fellowship at the New York University School of Medicine. She is the scientific chair of the HIV Cure Committee of the International Maternal, Pediatric Adolescent AIDS Clinical (IMPAACT) network, a consortium of researchers and institutions that was critical in leading the earliest clinical trials of mother-to-child transmission and early treatment of infants 15 years ago.

More than 300,000 HIV-infected babies are born each year worldwide despite ongoing efforts to prevent mother-to-child transmission in the first place. An estimated 34 million people worldwide, 3 million of them children, are currently living with HIV or AIDS.

Founded in 1912 as the children's hospital of the Johns Hopkins Medical Institutions, the Johns Hopkins Children's Center offers one of the most comprehensive pediatric medical programs in the country, with nearly 95,000 patient visits and some 9,000 admissions each year. Hopkins Children’s is consistently ranked among the top children's hospitals in the nation. Hopkins Children’s is Maryland's largest children’s hospital and the only state-designated Trauma Service and Burn Unit for pediatric patients. It has recognized Centers of Excellence in dozens of pediatric subspecialties, including allergy, cardiology, cystic fibrosis, gastroenterology, nephrology, neurology, neurosurgery, oncology, pulmonary, and transplant. For more information, visit www.hopkinschildrens.org.