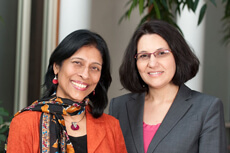 Delivering anticancer drugs into breast ducts via the nipple is highly effective in animal models of early breast cancer, and has no major side effects in human patients, according to a report by Johns Hopkins Kimmel Cancer Center researchers in Science Translational Medicine on Oct. 26. The results of the study are expected to lead to more advanced clinical trials of so-called intraductal treatment for early breast cancer.

"Our results support the theory that by treating the breast tissue directly we can reach a much more potent drug concentration where it is needed, with far fewer adverse effects on tissues outside the breasts," says oncologist Vered Stearns, M.D., the Breast Cancer Chair in Oncology and co-director of the Breast Cancer Program at the Kimmel Cancer Center, who supervised the clinical part of the study.

"This has been a classic translational medicine collaboration between a bench researcher and a clinician scientist," says cancer biologist Saraswati Sukumar, Ph.D., who supervised the animal tests.

Sukumar, the Barbara B. Rubenstein Professor of Oncology at the Kimmel Cancer Center, and co-director with Stearns of the Breast Cancer Program, began intraductal research more than a decade ago, reasoning that because most breast cancers originate from cells lining the milk ducts, early or preventive therapies should be delivered directly to the ducts via the nipple, rather than intravenously. In 2006, in the journal Cancer Research, Sukumar and her colleagues reported on an initial successful test of the technique using the chemotherapy drug doxorubicin against early ductal breast cancers in rats.

For the current study, Stearns set up a small clinical trial to determine the feasibility of Sukumar's technique in 17 breast cancer patients. Starting first with dextrose -- essentially sugar water -- and later with escalating doses of the same doxorubicin formulation used on Sukumar's rats (pegylated liposomal doxorubicin, or PLD), she was able to infuse patients' breast ducts via a small catheter placed into the nipple. The technique wasn't used in this case to treat cancer; the patients in the study all had established breast tumors and were awaiting mastectomies. But Stearns was able to establish that single doses of PLD to breast ducts caused only mild side effects including mild nipple pain and breast fullness.

A comparison of 12 patients receiving PLD intraductally with three patients treated with PLD by the standard intravenous route also was revealing, Stearns said. "Intraductal delivery of PLD resulted in much higher concentration in the breast compared to the circulation, whereas in the women with intravenous doses we saw relatively high concentrations in the blood but very little, if any, in the breast," she noted.

In the animal portion of the study, Sukumar's lab examined the intraductal effectiveness of four standard anticancer drugs, 5-fluorouracil (5FU), carboplatin, methotrexate and paclitaxel, all compared with PLD. Of these drugs, intraductal 5FU prevented the most cancers compared to no drug or to intravenous delivery. It also shrank established breast tumors with striking effectiveness, completely eliminating them in 10 of 14 treated rats, she said. "As both a preventive and a therapy, 5FU worked extremely well in these tests," Sukumar added.

5FU has the additional advantage, she noted, of sparing breast ducts the kind of damage caused by PLD, which at therapeutic doses can destroy large parts of the ductal lining. But perhaps the most intriguing outcome of these tests, she said was that preventive treatment of only four mammary glands in rats -- who have a total of twelve -- showed a strong effect in preventing tumors in the untreated glands as well. "We think that 5FU, at the high concentration achieved with intraductal delivery, elicits an immune response that can suppress tumor formation in the other ducts," Sukumar said. "This is an attractive feature, because some breast ducts in women are 'blind ducts' that are unconnected to the nipple and, therefore, unreachable directly with intraductal therapy."

Sukumar and Stearns say the next step is to set up a further clinical study with 5FU, based on the new findings. The goal is to use intraductal therapy to suppress tumors in patients with a high genetic risk for breast cancer or premalignant lesions in their breast ducts. "In principle, one could do such a procedure every ten years or so to keep one's breasts tumor-free, as an alternative to having the breasts removed," Sukumar says.