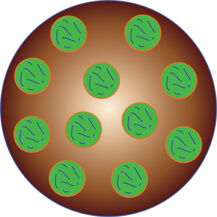 Johns Hopkins biomedical engineers have teamed up with clinicians to create a new drug-delivery strategy for a type of central vision loss caused by blood vessel growth at the back of the eye, where such growth should not occur. In addition to testing a new drug that effectively stops such runaway vessel growth in mice, the team gave the drug a biodegradable coating to keep it in the eye longer. If proven effective in humans, the engineers say, it could mean only two or three needle sticks to the eye per year instead of the monthly injections that are the current standard of care.

The new drug, in its time-release coating, was tested in mice with abnormalities similar to those experienced by people with neovascular age-related macular degeneration, or "wet" AMD. A description of the study results, currently available online, will be published in the October issue of the journal Biomaterials.

"If you lose central vision, you can't drive a car and you can't see your grandchildren," says Jordan Green, Ph.D., assistant professor of biomedical engineering and ophthalmology at The Johns Hopkins University. "You're willing to do what it takes to keep your sight. We hope that our system will work in people, and make invasive treatments much less frequent, and therefore easier to comply with, and safer."

According to Peter Campochiaro, M.D., the George S. & Dolores Doré Eccles Professor of Ophthalmology & Neuroscience, approximately 200,000 Americans suffer from central vision loss caused by wet AMD. The macula is a few square centimeters of tissue in the center of the retina at the back of the eye. It is responsible for the majority of a person's high-resolution vision, especially the high-res vision needed for driving and reading. There are normally no blood vessels in the outer part of the retina because it needs to be unobstructed to capture complete images. In patients with wet AMD, blood vessels from behind the retina can break through into the macula and leak fluid that reduces vision. This initially causes reversible loss of vision, but, if left untreated, visual loss becomes permanent.

Currently, wet AMD patients are treated with frequent (as often as once a month) injections into the eye of a drug that blocks one of the major stimulators of abnormal blood vessel growth. "Patients are given localized antibacterial and pain-numbing agents, and then a very fine needle is passed through the white of the eye into the central cavity where the drug is injected. It's not painful, but it isn’t something that patients enjoy," says Campochiaro. “The frequent visits for injections are a burden and each injection carries a small risk of infection, so one of our goals is to find new approaches that allow for fewer visits and injections.”

Green's laboratory, which specializes in designing new drug-delivery systems, worked with Campochiaro and Aleksander Popel, Ph.D., professor of biomedical engineering, whose laboratory discovered the new drug — a short piece of protein that blocks the growth of unwanted blood vessels. (The drugs currently on the market for treating wet AMD are longer protein pieces or full-length proteins that could become inactive if given a biodegradable coating.)

When the team tested the drug on cells grown in the lab, they found that it killed blood vessel cells and prevented growth of new blood vessels. The same effect was found when the drug was injected into the eyes of mice with abnormal blood vessels like those seen in wet AMD, but, as with the current standard treatment, the drug was only effective for about four weeks since the watery contents inside the eye gradually flushed it out.

The team’s solution, says Green, was to slow the release and depletion of the drug by covering it in non-toxic, biodegradable coatings. They first created "nanoparticles," tiny little spheres filled with the drug. When the spheres were placed in a watery environment, the water gradually broke down the coating and released the drug a little at a time. To maximize this effect, the team created larger spheres, called microparticles, filled with about a hundred nanoparticles per microparticle, and held together by another type of biodegradable "glue." The end result is something like a scoop of gumball ice cream. As the ice cream gets licked away, more and more gumballs (nanoparticles) are exposed.

Testing their microparticles in mice, the team found that the drug persisted in their eyes for at least 14 weeks, more than three times as long as the current treatment. Green says that the treatments may last longer in humans than in mice, but clinical trials will not begin before further testing in other animals.

Link to article in Biomaterials