The Color of Poop: Stool Guide, Mobile App to Speed Up Diagnoses of Life-Threatening Liver Condition in Newborns - 04/16/2014

The Color of Poop: Stool Guide, Mobile App to Speed Up Diagnoses of Life-Threatening Liver Condition in Newborns 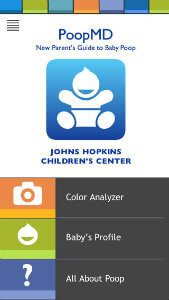 Fecal color and consistency are well-known markers of digestive health in both children and adults, but paying attention to a newborn’s shade of poop can be a decided lifesaver in babies born with the rare, liver-ravaging disorder biliary atresia, commonly heralded by white or clay-colored stool.

Yet new parents are rarely told to watch out for abnormalities in their baby’s stool. Now, pediatric gastroenterologists from the Johns Hopkins Children’s Center are on a mission to change that by tackling the problem on two fronts.

First, they have designed a simple, one-page stool color guide that Procter & Gamble Baby Care will distribute for free to birthing centers nationwide. In addition, a free mobile app, developed for Johns Hopkins by HCB Health, uses color recognition software to allow parents to snap photos of their baby’s stool and receive feedback within seconds. Parents then have the option of sending the photos to their pediatrician. The app also offers reminder notifications for stool-color checks every two weeks between birth and 2 months of age, the critical window to diagnose the disease. However, the experts caution, the app is an educational, rather than diagnostic, tool and parents should consult a physician if they have any concerns.

Biliary atresia, which occurs in roughly one out of 14,000 newborns in the United States, is the leading cause of liver failure in children and the number one reason for liver transplantation in children. Simple interventions, like the poop color chart and the mobile app, can greatly enhance recognition of abnormal stool and even make the difference between life and death in some cases of biliary atresia, the Johns Hopkins experts believe. A similar poop color chart had a dramatic impact in Taiwan after it implemented the stool-color card program nationwide. The approach led to faster diagnosis and improved the five-year survival rate by 33 percent — from 56 percent to 89 percent — according to a 2010 study published in the journal Hepatology.

The Johns Hopkins experts say neonatologists, primary care pediatricians and nurse practitioners who care for infants should educate parents about the importance of poop color — either formally, by giving them a take-home stool color chart, or informally, by merely talking to them about poop color.

“The truth is we don’t need an elaborate educational intervention. Something as simple as a tear-off sheet or a quick conversation about what to watch out for can go a long way, as demonstrated by the Taiwan experience,” says Douglas Mogul, M.D., M.P.H., a pediatric gastroenterologist at Johns Hopkins.

Mogul believes the mobile app can help ensure timely diagnoses because of its convenient automated reminders and because of the ubiquity of smart phones. A 2013 study by the Pew Research Institute found that 80 percent of adults ages 18 to 34 have a smartphone.

“Harnessing this simple and free app to help educate people of childbearing age on matters of newborn health is not only logical, it’s essential,” Mogul says.

Biliary atresia is marked by damaged or malformed bile ducts, the passageways that drain bile from the liver into the large intestine.  Build-up of bile in the liver can damage the organ. The disease progresses quickly and insidiously and has dire consequences if not caught in time, often requiring a liver transplant. The first line of treatment is to repair the bile ducts and restore bile flow to prevent irreversible liver damage. The timing of this first-line surgery, however, is critical.  Babies treated within the first two months of life have the best outcomes. Surgery successfully restores normal bile flow in nine out 10 babies who have the operation within 60 days of birth, but does so in only five out 10 infants who have the procedure a mere two to three weeks later, at age 71 to 90 days. In addition, babies who get the procedure earlier are far less likely to need a liver transplant down the road, research shows. Sadly, the 60-day golden window is all too often missed, the experts say, with the average time to diagnosis in the United States standing at 70 days. It is unclear, experts add, whether and how many pediatricians offer instructions to new parents on the importance of poop color, so stool may remain off a caregiver’s radar.

“Color-wise, anything other than black, red or white/pale yellow is likely to be normal,” Mogul says.

To see colors of normal and abnormal stool, go to
http://hopkinschildrens.org/stool-color-library/

The free PoopMD app is available on iTunes and Google Play (for Android devices).