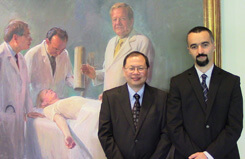 Neuroimaging scientists at The Johns Hopkins University and the University of Copenhagen are leading a team that received a $1.5 million grant from the Obama administration’s Brain Research through Advancing Innovative Neurotechnologies (BRAIN) Initiative to create a next-generation brain imaging system. They hope to help unlock the secrets of mental illnesses, including dementia, Parkinson's disease, depression and schizophrenia. The National Institutes of Health announced the award on Sept. 30.

The award is part of a $100 million BRAIN Initiative issued by President Barack Obama last year, aimed at driving our understanding of the brain forward by a quantum leap. “The human brain is, at the present time, the most complicated organ in the known universe,” said Francis Collins, director of the National Institutes of Health, in announcing the initiative alongside Obama.

Researchers were invited to submit proposals with a goal of advancing brain understanding. One successful proposal, “Imaging In Vivo Neurotransmitter Modulation of Brain Network Activity in Realtime,” was led by joint principal investigators Arman Rahmim, Ph.D., a chief physicist and imaging expert in the Johns Hopkins University departments of Radiology and Radiological Science and of Electrical and Computer Engineering; neuroscientist Albert Gjedde, M.D., D.Sc., a professor of neurobiology and pharmacology at the University of Copenhagen; and Dean F. Wong, M.D., Ph.D., a professor of radiology and radiological science, psychiatry, and neuroscience at The Johns Hopkins University, the Johns Hopkins Bloomberg School of Public Health and the Johns Hopkins Carey Business School. The proposal aimed to provide transformative brain imaging that currently does not exist.

Wong and Gjedde were pioneering team members in the 1983-86 PET (positron emission tomography) human brain imaging of dopamine receptors, which is currently the most direct and specific way to capture chemical signatures in the brain that can explain diseases and behavior. They now serve as adjunct professors at each other’s institutions, following decades of collaboration. Wong and Rahmim work together in the Section of High-Resolution Brain PET Imaging at Johns Hopkins.

The three-year grant will be used to develop a noninvasive way of measuring human brain neuronal activity and chemical changes in milliseconds as opposed to several minutes, as in current PET scans. The new technique will also be much more sensitive to neurochemical processes than other imaging techniques, including functional magnetic resonance imaging and magnetoencephalographic recording of brain magnetic fields.

Wong compares the current state of PET technology to a traffic study that can tell when cars arrive at certain points but that can’t document fender-benders or detours along the way. The new technology, if successful, will be able to show that car’s travel in detail. The result will be a vastly superior and insightful understanding of how both healthy and unhealthy brains work, says Wong.

“Most processes, whether in normal or abnormal brains, take place in the millisecond range or less,” he says. Understanding how the brain works and reacts could lead to a vastly improved understanding of behavior and disorders, Wong says.

Gjedde references the motto of his department, "Minds Make Molecules, Molecules Make Sense." The new technology, he says, “will help us understand how the brain makes sense of the molecules released during brain activity.”

The team expects the three-year planning grant to yield a proof-of-concept, including preclinical trials, for a noninvasive system that would use light- and sound-emitting dyes to measure brain activity in three dimensions, along with software to analyze the resulting information. The scanner would resemble a helmet, with sensors that read brain activity as expressed in the action of dyes. “What is especially exciting about this project is its highly multidisciplinary nature. It brings together people with expertise in chemistry, material science, drug delivery, optical and acoustic imaging, image reconstruction and modeling, and clinical and translational imaging to achieve our aims,” Rahmim says.

To get the dyes to the brain, the investigators plan to use a nanoparticle that could be injected intravenously. When it reaches the brain, gentle ultrasound warming would be applied, releasing the marker into the brain tissue of interest.

Following the planning grant, the team hopes to create a working machine within three to five years.

Questions to the investigators can be addressed to the joint corresponding principal investigator, Dean Wong, at dfwong@jhmi.edu.