"Transportation" may be at the heart of the disease
Release Date: June 4, 2014 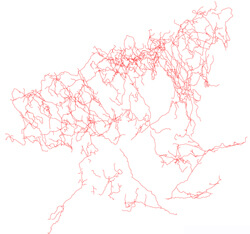 1 2
The paths taken by a single cholinergic neuron as it branches through a thin section of the forebrain of a mouse
Nathans Lab, eLife

By studying laboratory mice, scientists at The Johns Hopkins University have succeeded in plotting the labyrinthine paths of some of the largest nerve cells in the mammalian brain: cholinergic neurons, the first cells to degenerate in people with Alzheimer’s disease.

“For us, this was like scaling Mount Everest,” says Jeremy Nathans, Ph.D., professor of molecular biology and genetics, neuroscience, and ophthalmology at the Johns Hopkins University School of Medicine. “This work reveals the amazing challenges that cholinergic neurons face every day. Each of these cells is like a city connected to its suburbs by a single, one-lane road, with all of the emergency services located only in the city. You can imagine how hard it would be in a crisis if all of the emergency vehicles had to get to the suburbs along that one road. We think something like this might be happening when cholinergic neurons trying to repair the damage done by Alzheimer’s disease.”

Each cholinergic neuron, Nathans explains, has roughly 1,000 branch points. If lined up end to end, one neuron’s branches would add up to approximately 15 times the length of the mouse brain. But all of the branches are connected by a single, extremely thin “pipeline” to one hub — the cell body — that provides for the needs of the branches. The challenge of moving material through this single pipeline could make it very difficult for cholinergic neurons to combat the challenges that come with a disorder like Alzheimer’s disease, he says. Now, by mapping the branches and pipelines, scientists will likely get a better fix on what happens when the neurons fail to meet the challenges.

A summary of the research was published online in the journal eLife on May 7.

Cholinergic neurons are among the largest neurons in the mammal brain. Named for their release of a chemical messenger called acetylcholine, they number only in the thousands in mouse brains, a tiny fraction of the 50 to 100 million total neurons. Their cell bodies are located at the base of the brain near its front end, but their branches extend throughout the cerebral cortex, the outermost, wrinkled layer of “grey matter” that is responsible for the mind’s most advanced intellectual functions. Therefore, although there are relatively few cholinergic neurons, they affect a very large part of the brain, Nathans says.

Due to the technical challenge of visualizing the complicated paths of hundreds of tiny branches from a single neuron tangled within millions of other neurons, the actual size and shape of individual cholinergic neurons — and the territory they cover — had been unknown until now, Nathans says. Using genetic engineering methods, the Nathans team programmed several cholinergic neurons per mouse to make a protein that could be seen with a colored chemical reaction. Critical to the success of the work was the ability to limit the number of cells making the protein — if all of the cholinergic neurons made the protein, it would have been impossible to distinguish individual branches.

Because microscopes cannot see through thick tissue, Nathans and his team preserved the mouse brains and then thinly sliced them to produce serial images. The branching path of each neuron was then painstakingly reconstructed from the serial images and analyzed. In adult mice, he says, the average length of the branches of a single cholinergic neuron, lined up end to end, is 31 cm (12 inches), varying from 11 to 49 cm (4 to 19 inches). The average length of a mouse brain is only 2 cm — a bit less than one inch. Although each cholinergic neuron, on average, contains approximately 1,000 branch points, they vary significantly in the extent of the territory that they cover.

The researchers used the same techniques to study the cholinergic neurons of mice with a rodent form of Alzheimer’s disease and found that the branches were fragmented. They also found clumps of material that may have been debris from the disintegrating branches.

Although the cholinergic neurons of human brains have not been individually traced, Nathans’ team was able to calculate that the average cholinergic neuron in the human brain has a total branch length of approximately 100 meters, a bit longer than a football field. “That is a really long pipeline, especially if one considers that the pipes have diameters of only 30 thousandths of a millimeter, far narrower than a human hair,” says Nathans.

He adds, “Although our study only defined a few simple, physical properties of these neurons, such as size and shape, it has equipped us to form and test better hypotheses about what goes wrong with them during disease.”

Other authors of the report include Hao Wu and John Williams of the Johns Hopkins University School of Medicine.

This work was supported by grants from the Human Frontier Science Program, the Howard Hughes Medical Institute and the Brain Science Institute of The Johns Hopkins University.

We are providing these photos with the understanding that they will be used only to help illustrate the story in the corresponding news release. Please find appropriate caption/credit information with the files. If there is anything else you need, please email us at JHMedia@jhmi.edu. Thank you.