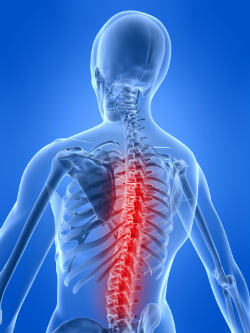 In a report published in the April edition of the Journal of Spinal Disorders and Techniques, a Johns Hopkins team says that only 10 percent of orthopaedic surgeons and neurosurgeons follow professional guidelines recommending routine psychological screenings of patients prior to major surgery for severe back and leg pain.

The oversight, researchers say, may pose a serious risk to patients’ surgical recovery. Previous reports have tied bouts of depression to longer recuperations, delayed returns to work, more postsurgical complications and failures to comply with medication schedules after patients leave the hospital.

More than 600,000 major spine surgeries are performed each year across the United States, where specialized surgeons straighten and strengthen damaged or narrowed spines with bone grafts and metal plates. Such problems in the lumbar, or lower, portion of the spine can often leave people unable to perform routine tasks, including lifting groceries, walking long distances and climbing stairs.

The Johns Hopkins report, based on a survey of spine surgeons, is believed to be the first gauge of how many actually use a two-part, presurgical psychological screening test, known as PPS. The U.S. Preventive Services Task Force, a national group of experts in best clinical practices, recommends such screenings, which involve a 20- to 25-minute questionnaire, and a follow-up, as needed, with a longer assessment by a trained psychologist.

“Our survey results show that surgeons and patients still have a long way to go in recognizing and appreciating how much psychological factors and mental health can impact the success of their back surgeries,” says health services researcher and senior study investigator Richard Skolasky, Sc.D. “It may be necessary to delay surgery in order to first treat a patient’s depression or anxiety to minimize the likelihood of prolonged recuperation after their operation.

“This study should serve as an important reminder to all clinicians to adopt presurgical psychological screening guidelines, and to establish protocols to ensure they are followed,” he adds, Skolasky, who directs the Johns Hopkins Spine Outcomes Research Center and is an associate professor in orthopedic surgery at the Johns Hopkins University School of Medicine, says, “Ideally, patients should also be asking their surgeons for such assessments prior to surgery as part of their own personal presurgical checklist.”

For the survey, conducted from December 2010 to January 2011, Skolasky’s team e-mailed a 20-minute questionnaire to 340 licensed spine surgeons across the country. Some 110, mostly men, responded. Almost half had more than 15 years of experience, and just over half were based at university hospitals.

Among other key findings was that highly experienced spine surgeons were more likely to use the assessment tools than those with less than 15 years of experience in the field. Orthopedic and neurosurgeons with a higher volume of patients, more than 200 a year, also favored the screening compared to colleagues who performed fewer procedures.

Researchers say they were surprised to discover that spine surgeons in private practice or in community hospitals carried out more psychological screening tests than their counterparts in larger, university-affiliated hospitals.

Skolasky says that this is counterintuitive – academic medical centers have ready access to psychologists and other testing resources that community hospitals usually lack. He says some surgeons may view psychological screening as an unnecessary surgical delay, during which time a patient’s condition can deteriorate quickly, or surgeons simply may not be well-enough aware of the important role played by mental health in postsurgical recovery.

Ultimately, Skolasky says, it all comes down to training, understanding why surgeons don’t use the recommended screening tests and how testing needs to be highlighted during surgical education so it is better adopted into practice.

He says a better job needs to be done explaining the benefits of presurgical psychological screening to both surgeons and patients. Skolasky and his research team are planning further research to better assess how screening and treatment for anxiety and depression before any back surgery speed up or prolong a patient’s recovery.

Funding support for this study was provided by the Johns Hopkins’ Provost’s Undergraduate Research Award.