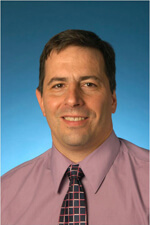 Samuel Denmeade, M.D.
In a surprising paradox, the male hormone testosterone, generally thought to be a feeder of prostate cancer, has been found to suppress some advanced prostate cancers and also may reverse resistance to testosterone-blocking drugs used to treat prostate cancer.
The finding, by scientists at the Johns Hopkins Kimmel Cancer Center, is reported in the Jan. 7 issue of Science Translational Medicine.
Medical oncologist Samuel Denmeade, M.D., who led the small study of 16 patients with metastatic prostate cancer, warns that the timing of testosterone treatment used in his research is critical and difficult to determine, and says men should not try to self-medicate their cancers with testosterone supplements available over the counter.
Previous studies, he adds, have shown that taking testosterone at the wrong time — particularly by men with symptoms of active cancer progression who have not yet received testosterone-blocking therapy — can make the disease worse.
In men whose prostate cancer spreads, doctors typically prescribe drugs that block testosterone production, but cancer cells eventually become resistant to this means of reducing the hormone, says Denmeade, a professor of oncology at the Johns Hopkins University School of Medicine. At that point, physicians switch to other drugs, such as enzalutamide, which block testosterone’s ability to bind to receptors within prostate cancer cells.
Denmeade says the combination of drugs that block testosterone production and receptors, called androgen deprivation therapy, may make prostate cancer more aggressive over time by enabling prostate cancer cells to subvert attempts to block testosterone receptors. And many men on these drugs experience harsh side effects, including impotence, weight gain, muscle loss and intense fatigue.
“This really is the most lethal form of prostate cancer,” says Michael Schweizer, M.D., researcher at Fred Hutchinson Cancer Research Center and contributor to the study during his recent fellowship at Johns Hopkins. “It’s the one that’s the most resistant, and typically, once people progress to this stage, it’s when we start to worry that they’re at a much higher risk for dying from prostate cancer.”
With this context, the new study tested an approach based on the idea that if prostate cancer cells were flooded with testosterone, the cells might be killed by the hormone shock. The cells also might react by making fewer receptors, which may make the prostate tumor cells vulnerable once more to androgen deprivation therapy.
For the study, Denmeade and his colleagues enrolled 16 men who had been receiving testosterone-lowering treatment for metastatic prostate cancer at Johns Hopkins. All had been treated previously with at least one type of androgen deprivation therapy and had rising levels of prostate specific antigen (PSA), a blood marker for prostate cancer, and radiographic evidence their cancers were becoming resistant.
The men were given three 28-day cycles of an intramuscular injection of testosterone and two weeks of a chemotherapy drug called etoposide. Men who showed decreases in PSA levels after three cycles were continued on testosterone injections alone.
Of the 16, two did not complete the study: One died of pneumonia and sepsis due to the etoposide, and the other experienced prolonged erection, a side effect of the testosterone.
Of the 14 remaining in the trial, seven experienced a dip in their PSA levels of between 30 and 99 percent, an indication their cancers were stable or lessening in severity. Seven of the men showed no decrease in PSA.
In addition, four of the seven men stayed on testosterone therapy for 12 to 24 months with continued low PSA levels. Of 10 men whose metastatic cancers could be measured with imaging scans, five experienced tumor shrinkage by more than half, including one man whose cancer completely disappeared.
“Surprisingly, we saw PSA reductions in all of 10 men, including four whose PSA didn’t change during the trial, who were given testosterone-blocking drugs after the testosterone treatment,” says Denmeade. The scientists say these results suggest that testosterone therapy has the potential to reverse the resistance that eventually develops to testosterone-blocking drugs like enzalutamide.
Three of the study participants have died since the study began in 2010; the rest are still alive.
During the cycles of etoposide, many of the men experienced the usual side effects of chemotherapy, including nausea, fatigue, hair loss, swelling and low blood counts. In men receiving only the testosterone injection, however, side effects were rare among the men and usually low grade.
Denmeade says that more studies are being planned at Johns Hopkins and other hospitals.
“There has been a groundswell of interest in the idea of reversing resistance to androgen deprivation therapy. We have plenty of anecdotes and some evidence in this small study, but it’s important to test it in larger groups of patients,” he adds.
Funding for the clinical trial was provided by the One-in-Six Foundation in Akron, Ohio.
Other scientists at Johns Hopkins who contributed to the study include Michael Schweizer (now at the Fred Hutchinson Cancer Research Center and the University of Washington), Emmanuel Antonarakis, Hao Wang, Atinuke Ajiboye, Avery Spitz, Harry Cao, Jun Luo, Michael Haffner, Vasan Yegnasubramanian, Michael Carducci, Mario Eisenbergery and John Isaacs.
Related Article:
Sci. Transl. Med. DOI: 10.1126/scitranslmed.3010563
Return to Top