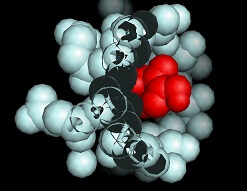 Johns Hopkins researchers have developed a sugar-based molecular microcapsule that eliminates the toxicity of an anticancer agent developed a decade ago at Johns Hopkins, called 3-bromopyruvate, or 3BrPA, in studies of mice with implants of human pancreatic cancer tissue. The encapsulated drug packed a potent anticancer punch, stopping the progression of tumors in the mice, but without the usual toxic effects.
“We developed 3BrPA to target a hallmark of cancer cells, namely their increased dependency on glucose compared with normal cells. But the nonencapsulated drug is toxic to healthy tissues and inactivated as it navigates through the blood, so finding a way to encapsulate the drug and protect normal tissues extends its promise in many cancers as it homes in on tumor cells,” says Jean-Francois Geschwind, M.D., chief of the Division of Interventional Radiology at Johns Hopkins Medicine.
The Johns Hopkins team used a microshell made of a sugar-based polymer called cyclodextrin to protect the 3BrPA drug molecules from disintegrating early and to guard healthy tissue from the drug’s toxic effects, such as weight loss, hypothermia and lethal hypoglycemic shock.
Geschwind, a professor in the Russell H. Morgan Department of Radiology and Radiological Science at the Johns Hopkins University School of Medicine and its Kimmel Cancer Center, and others at Johns Hopkins have been studying the experimental drug as a cancer treatment for over a decade because of its ability to block a key metabolic pathway of cancer cells.
Most cancer cells, he explains, rely on the use of glucose to thrive, a process known as the Warburg effect, for Otto Heinrich Warburg, who was awarded the Nobel Prize in Physiology for the discovery in 1931. By using the same cellular channels that funnel glucose into a cancer cell, 3BrPA can travel inside the cancer cell and block its glucose metabolic pathway, Geschwind says.
However, animal studies have shown that in its free, nonencapsulated state, the drug is very toxic, says Geschwind.
The toxicity associated with the free-form version of the drug, he says, has prevented physicians from using the drug as a systemic treatment in people, one that can travel throughout the whole body.
In a report about their study published online Oct. 17 in Clinical Cancer Research, the researchers described minimal or zero tumor progression in mice treated with the microencapsulated 3BrPA. By contrast, a signal of tumor activity increased sixty-fold in mice treated with the widely used chemotherapy drug gemcitabine. Activity increased 140-fold in mice who received the drug without encapsulation.
Specifically, daily injections of nonencapsulated 3BrPA were highly toxic to the animals, as only 28 percent of the animals survived the 28-day treatment. All of the mice who received the encapsulated drug survived to the end of the study.
Geschwind says the “extremely promising results” of the study make the encapsulated drug a good candidate for clinical trials, particularly for patients with pancreatic ductal adenocarcinoma. These cancers rank as the fourth most common cause of cancer-related deaths in the world, with a five-year survival rate of less than 5 percent. In the mouse studies, the encapsulated medication also reduced the metastatic spread of pancreatic cancer cells.
Other Johns Hopkins researchers who contributed to the study include Julius Chapiro, Surojit Sur, Lynn Jeanette Savic, Shanmugasundaram Ganapathy-Kaniappan, Juvenal Reyes, Rafael Duran, Sivarajan Chettiar-Thiruganasambandam, Cassandra Rae Moats, MingDe Lin, Weibo Luo, Phuoc T. Tran, Joseph M. Herman, Gregg L. Semenza, Andrew J. Ewald and Bert Vogelstein.
The study was funded by the National Institutes of Health’s National Cancer Institute grants (R01 CA160771, P30 CA006973, NCRR UL1 RR 025005 and DOD CDMRP, W81XWH-11-1-0343, K99-CA168746, R01CA166348), the Rolf W. Gunther Foundation for Radiological Science, the American Cancer Society (RSG-12-141-01-CSM), the Virginia and D.K. Ludwig Fund for Cancer Research, and the Lustgarten Foundation.
Geschwind has served as a consultant for BTG, Bayer HealthCare, Guerbet, Philips Healthcare and Boston-Scientific. He has received grant support from the National Institutes of Health, Department of Defense, Society of Interventional Radiology, Radiological Society of North America, BTG, Bayer HealthCare, Philips Healthcare, Threshold and Guerbet. He is the CEO and founder of PreScience Labs, which has licensed 3BrPA from Johns Hopkins.