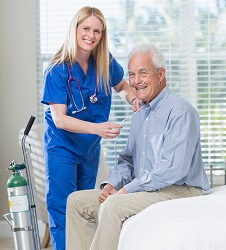 A newly published study of people with chronic obstructive pulmonary disease (COPD) concludes that long-term supplemental oxygen treatment results in little or no change in time to death, time to first hospitalizations or significant quality of life improvements for those with moderately low blood oxygen levels.

The findings, published in the New England Journal of Medicine on Oct. 27, are based on research examining oxygen treatment outcomes in 738 COPD patients with moderately low blood oxygen levels at 42 clinical centers in the United States. The study began in 2009 and ended in 2015. Patients who received supplemental oxygen over the course of the study showed no significant differences in rate of hospitalizations, time to death after diagnosis, exercise capacity or quality of life when compared to patients who did not receive supplemental oxygen.

“The benefits of long-term oxygen supplements for COPD patients with severe oxygen deficiency are clear,” says Robert Wise, M.D., professor of medicine in the Johns Hopkins University School of Medicine’s Division of Pulmonary and Critical Care Medicine and the paper’s corresponding author. “However, it’s never been established what benefits, if any, exist for patients with less severe oxygen deficiency.”

Participants in each of the two groups were randomly assigned to get supplemental oxygen or no supplemental oxygen at the start of the study, and all visited clinics annually for follow-up examinations that included oxygen levels at rest and exercise, oxygen use, respiratory symptoms and quality of life. All participants also completed telephone interviews biannually and completed mailed questionnaires regarding symptoms and health care use at four and 16 months.

Of the 738 total patients studied with moderate oxygen deficiency, 368 received supplemental oxygen, and 370 did not. Wise says the primary outcomes measured — time to death or time to first hospitalization — were essentially the same in both groups. The risk of death in the no-oxygen group was 5.7 percent per year, compared to 5.2 percent per year for the oxygen group. Overall, the risk of death or hospitalization was not different between the two treatment groups.

The researchers also found no significant differences between the oxygen treatment and non-oxygen treatment groups in all hospitalization rates; COPD exacerbations, defined as sudden worsening of COPD symptoms, such as shortness of breath and phlegm production that lasts for several days; self-reported quality of life; lung function; or measures of walk distance.

Even when researchers controlled for variables such as total hours of oxygen use, race, sex and smoking status, no significant differences in the primary outcomes arose, Wise says.

“No matter what measure we looked at, it made no apparent difference whether a patient with moderate oxygen deficiency received long-term oxygen treatments or not. I think the evidence is strong and shows that some patients may not need those treatments at all,” says Wise.

Wise cautioned that “we don’t want to imply that everyone with COPD now using oxygen should stop; some individual patients may find that they can do more activities or have more effective exercise training if they use oxygen. Every patient should discuss his or her specific needs with his or her health care provider, but the data show, very clearly, that for many COPD patients with moderately low blood oxygen levels, supplemental oxygen won’t help you live any longer or keep you out of the hospital.”

Supplemental oxygen therapy can be considered burdensome and expensive for many. From 2009 to 2011, Medicare reimbursements for oxygen-related costs for COPD patients exceeded $2 billion per year. Supplemental oxygen therapy requires those using it to carry or cart around heavy and bulky oxygen delivery equipment, sometimes resulting in adverse events, such as tripping over equipment or the start of fires.

According to the COPD Foundation, an estimated 24 million people in the U.S. suffer from COPD, and it is the third leading cause of death in the nation.