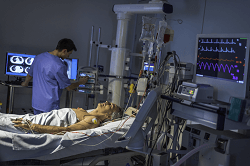 A new study by a team of Johns Hopkins researchers found that most survivors of acute respiratory distress syndrome (ARDS) decline physically in the five years after hospital discharge, and those at higher levels of risk of decline are older and had greater medical problems prior to hospitalization for ARDS.

The study, summarized in a report published Oct. 1 in Intensive Care Medicine, followed 193 survivors for five years after ARDS and found that 86 percent experienced decline in at least one of three physical measures — muscle strength, exercise capacity and self-reported physical functioning — or death. Older age and pre-existing illnesses were the key risk factors for physical decline.

“Many people assume that once you survive a stay in the intensive care unit, you’re on a constant upward trajectory of recovery. We found that the vast majority of patients do not follow that pathway, instead following a rocky course with fluctuating recovery or a downward trajectory of physical decline,” says senior author Dale Needham, M.D., Ph.D., professor of pulmonary and critical care medicine at the Johns Hopkins University School of Medicine. “These findings have helped us determine that older survivors and those who enter the ICU with other pre-existing illnesses have the highest risk of physical decline, and support future efforts to design and evaluate post-ICU rehabilitation specifically targeting these types of patients.”

The study focused on survivors of ARDS, a lung condition caused by different insults, such as infection, which leads to fluid buildup in the lung’s air sacs. The resulting damage leads to a substantial decrease in oxygen reaching the bloodstream and often requires use of a life support breathing machine. ARDS affects approximately 150,000 Americans annually.

“This study was one of the first to look at long-term declines after hospital discharge in three distinct physical measures. The results give us a clearer picture of what types of patients require ongoing support and when,” says Elizabeth Pfoh, former general internal medicine research fellow at the Johns Hopkins University School of Medicine and the paper’s co-first author. She is now associate staff at the Center for Value-Based Care Research at Cleveland Clinic.

“Generally, ICU survivors receive physical and occupational rehabilitation immediately following hospital discharge, but not necessarily for long after. These results show that additional research is needed to determine the potential effects of prolonged rehabilitation, specifically for older survivors and those who entered the ICU with pre-existing illnesses. This would also complement ongoing research evaluating the short- and long-term effects of rehabilitation started early while patients are in the ICU,” says Needham.

Other authors on this paper include Amy W. Wozniak, Elizabeth Colantuoni, Victor D. Dinglas, Pedro A. Mendez-Tellez, Nancy D. Ciesla and Peter J. Pronovost of The Johns Hopkins University, and Carl Shanholtz of the University of Maryland School of Medicine.

Funding for this study was provided by the National Institutes of Health's National Heart, Lung, and Blood Institute (P050HL73994, R01HL088045, K24HL088551), the Johns Hopkins Institute for Clinical and Translation Research (UL1 TR 000424-06), and an Institutional National Research Service Award to the Johns Hopkins University School of Medicine (T32HP10025B0)